Who Are Those Composers? ~ Giosy & Mario Capuano 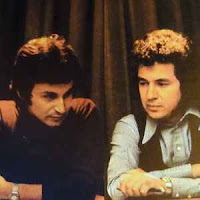 Giosafatte ‘Giosy’ Capuano and his younger brother Mario Capuano were born in Rome in the mid-1940s. They both began their musical careers as teenagers. Giosy went to Rome to start his career while Mario spent over three years in Scandanavia while both were in their late teens. Giosy contacted Mario and had him join him in Rome working as a team of producers, composers, arrangers and songwriters at Durium records. They would spend the next 20 years in this artistic association. They formed their own group and immediately began to find international success with three records in the top ten all at the same time. Tweedle Dee Tweedle Dum, Sacramento, Samson & Delilah, Bottoms Up, Union Silver, Kailakee Kailakoo, Honey No, Yellow Boomerang, On This Land, Give It Time, To Remind Me, The Talk of All The USA. Other artists then began using compositions written and arranged by the Capuano brothers to great success such as Sheila (Les Rois Mages, Vive La Terre), Demis Roussos (Perdoname), Nana Mouskouri (Ni Vivre Ni Mourir), Agnetha Fältskog (ABBA) (En Sång Om Sorg Och Glädje), Johan Daansen (Deadly Game), Sonny Blanco (Blueberry  Wine), Tommy Steiner (Ich Dech 'Mich Zu Mit Meinen Träumen), Andy Foxx (Afrikaan Blue, Thank The Lord For The Night), Cyan (Misaluba), Rita Deneve (Zomordromen), Mal (Mighty Mighty & Roly Poly, Crazy Kings, Love Collector), Anita Mayer (No One To Hold Me), Tosti & Capuano Brothers
(Indian Springtime), an instrumental television theme for the transmission ‘The Boys of the Five Circles’ aired on the occasion of the 1972 Olympic Games. .

The brothers founded, in partnership with Giacomo Tosti, Catoca, a record company with offices and studios in Rome and offices in London . It is abroad, in fact, that Mario followed to carry out much of his work, with the exception of some Italian parentheses as arranger/producer and author, writing, among other things, pieces for Amii Stewart (Working Late Tonight, with which he participates in the Festival of Sanremo 1983 , and Mother Mary) and Tullio de Piscopo (Slow progress, And Then and Then, Qui gatta incubates, three titles linked to as many participations in Sanremo, besides Jastaò, Libero, Compressed energy and what have you got?

The duo composed the score for one Euro-western: “Two Faces of the Dollar” (1967).