‘Verkehrswestern’ (‘Traffic Western’) was a series of five film segments produced for the German Sesame Street co-production ‘Sesamstrasse’ in 1980. They focused on rules of traffic safety, but used old Western characters and settings, particularly reminiscent of the Spaghetti westerns. Christoph Busse wrote and directed the series. With Hartmut Westphal, he also composed the music (which included tracks modeled after Ennio Morricone's western scores). The cameraman was Axel Henschel. 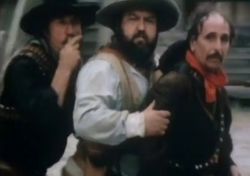 The series was shot on location in the desert of Almeria, Spain (used by director Sergio Leone for “The Good, the Bad and the Ugly” and other films). The cast was composed mostly of Spanish-speaking actors who were Spaghetti western veterans: Ricardo Palacios (as the sheriff) and Adolfo Thous, Cris Huerta, and Román Ariznavarreta (as the bandits). The sole German actor was Jochen Schroeder, as townsman Hank. The other performers were dubbed into German.

Set in a dusty Western city (identified by a sign as "Western City"), all segments followed the same basic formula and included repeated running gags. The sheriff checks the time with his pocket watch, which plays a snatch of Beethovens's fifth symphony as a chime. He is soon alerted by the bookish, bespectacled Hank that the dreaded Dollar Gang (Die Dollar Bande in German) are coming to rob the bank (before it closes at noon). The gang consists of the boss (Thous), the fat one (Huerta), and skinny, hungry Don (Ariznavarreta) who has a tendency to noisily munch or spill snacks whenever they sneak into town. (The other members are named Dan and Derek according to the sheriff, but it's not clear which is which.) 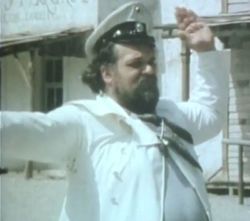 Hank suggests a strategy from his book, which the sheriff assumes has tricks, but is actually a book on traffic safety. In a silent scene with comedy piano backing, Hank and the sheriff prepare suitable traffic obstacles or regulations to slow down the Dollar Gang. The bandits arrive, resign themselves to a safety lecture... and find the bank is closed (and the boss then eats his own hat in frustration). Having saved the bank again, the sheriff happily practices the safety regulations himself. 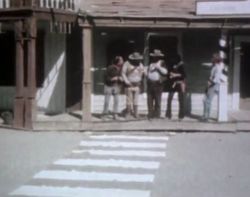