Dan Dakota (aka Lone Gun) was a western hero found first appearing in Ranger magazine issue #25 published by Fleetway. He was the creation of Arturo Del Castillo and appeared in 11 issues.

Ranger was a British comic book magazine, with occasional printed stories, published by Fleetway Publications for 40 un-numbered issues between 18 September 1965 and 18 June 1966. The title was then incorporated into Look and Learn from issue 232, dated 25 June 1966.

The title was created by Leonard Matthews but edited by John Sanders, with Ken Roscoe as assistant editor and Colin Parker as art editor. 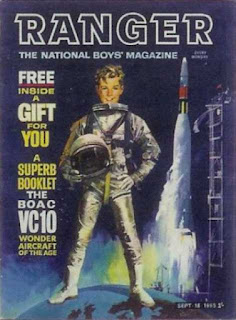 Dan Dakota would later be reprinted in the Italian magazine Albo Avventur. 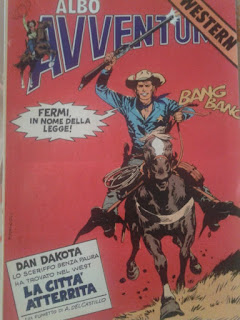 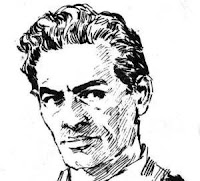 Arturo Pérez Del Castillo was born in Concepcion, Chile on August 24, 1925. He started working for an advertising agency, but eventually joined his brother Jorge Perez del Castillo in Buenos Aires, Argentina, in 1948. He got a job as a letterer and illustrator with Editorial Columba and its magazine Aventuras, and remained affiliated with the publisher until the mid 1950s. He did his first work for for the comic weekly Aventuras, and a year later, he also created comic strips for the magazines Intervalo and El Tony. He quickly became famous for his skillful and detailed penwork, mainly for western comics.

Also for Britian, he drew western stories in Top Spot ('Ringo') and Ranger ('Dan Dakota - Lone Gun') and also for the Cowboy Picture Library. 'Ringo' was one of his longest running serials, that he created in cooperation with Oesterheld between 1968 and 1974. His western stories also appeared in France in the pocket-sized comic books published by Arédit and Sagédition, and in Holland in the comic magazine Sjors.

He worked for the publications of Editorial Columba, such as El Tony, D'Artagnan and Fantasía, until his retirement in 1989. Among his new creations were 'Bannister' with Ray Collins in El Tony in 1981. Arturo Del Castillo died in Buenos Aires on December 5, 1992.