The Desolate Spanish Province Where Hollywood Westerns Were Filmed


Mark Parascandola’s photos tell the strange, melancholy story of the erection, disintegration, and repurposing of the 1960s film sets. 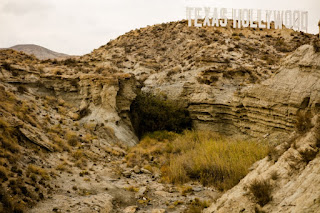 [Mark Parascandola, “Entrance, Fort Bravo/Texas Hollywood” in Once Upon A Time In Almería (courtesy the artist and Daylight Books)]

What you may not know about classic, campy films like Lawrence of Arabia (1962) and Cleopatra (1963) is that they were filmed in rural, southeastern Spain as part of an elaborate economic strategy devised by dictator Francisco Franco. Almería, a sparsely populated, impoverished province that was at one time extremely isolated, became the epicenter for the filming of American-made western films. This meant that countless western sets and faux towns filled the once empty space of the Spanish landscape in the ’60s. This land, bearing architectural evidence of Neolithic civilization, ancient Romans, and castle-building Moors, now watched a more modern, though equally fleeting, guest take up residence: Hollywood.

Franco’s transformation of Almería from desolate, quiet land to site of American imperialism depended on a perfect storm of economic, political, and social conditions. Franco hoped to reinvigorate a Spanish economy broken by the Civil War, and Hollywood studios needed cheap labor and exciting filming locations that might entice international audiences. In 1964, the Spanish government allowed for production crews and equipment to freely move through the country, and, in 1968, an airport was built in Almería to accommodate the influx of American filmmakers.

[Mark Parascandola, “Cortijo del Fraile, Níjar” in Once Upon A Time In Almería (courtesy the artist and Daylight Books)]

The United States government also played a role in this narrative — it remained complicit with Franco’s oppressive regime in an effort retain an ally against the Soviet Union. With these factors taken together, Hollywood executives readily capitalized on Almería’s promise of a desert-like setting — one that could feasibly pass for terrains of the American West, the Arabian Desert, North Africa, and the moon — as well as the exploitation of impoverished Roma people who worked as extras in many of these movies.

Today, some of these famed sets of the 1960s remain intact and function as tourist attractions atop the still largely desolate terrain. Filmmaking in Almería declined hugely in the ’70s, though the province saw some Hollywood excitement during the ’80s with the production of Indiana Jones and the Last Crusade (1989) and, as recently as 2016, some of Game of Thrones season six was shot in Almería. 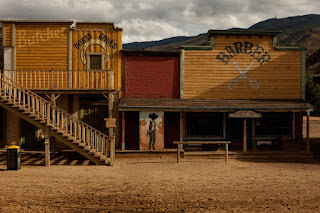 [Mark Parascandola, “Butcher Barber, Mini Hollywood” in Once Upon A Time In Almería (courtesy the artist and Daylight Books)] 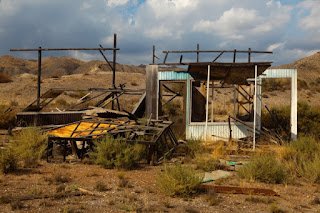 [Mark Parascandola, “Ruins of the El Condor Fort, Tabernas” in Once Upon A Time In Almería (courtesy the artist and Daylight Books)]

Photographer and epidemiologist Mark Parascandola, whose mother’s family immigrated to the US from Almería during the 1930s, believes that his grandmother’s Almería is “mostly gone.” He learned about Almería through her stories of her desert village, and he’s described the province as “distant and otherworldly.”

In Once Upon A Time In Almería, Parascandola captures the ghostliness that permeates even the sunniest of environments. His photos, taken between 2011 and 2016, tell the melancholy story of the erection, disintegration, and repurposing of these sets, and the ways in which the filmmaking storyline is a part of Almería’s long history of witnessing and reckoning with ephemeral civilizations. Some photos depict untouched landscape — hills, palms, sea, and sand. Still others display the ancient ruins and 10th-century castles left behind by other transitory residents of Almería.

“These ruins also serve as a reminder of the impermanence of our ties to the landscape, and as evidence of the economic and social changes that drive human migration, including that of my own family,” Parascandola writes in his essay in Once Upon A Time In Almería.

[Mark Parascandola, “Ruins of Flagstone, La Calahorra” in Once Upon A Time In Almería (courtesy the artist and Daylight Books)] 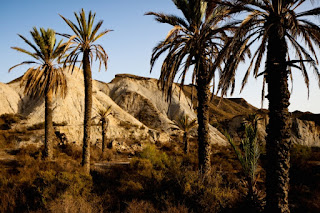 [Mark Parascandola, “Oasis, Rambla Viciana, Tabernas” in Once Upon A Time In Almería (courtesy the artist and Daylight Books)]


Parascandola’s photos are unexpectedly sumptuous, considering their mostly barren subject matter. One image captures the ruins of the “Western town” of Flagstone at La Calahorra. The photo spans two full pages of the book, and it shows two crumbling red-brick buildings separated by an apparently new road. A flock of birds flies in the empty, liminal space between the two structures, the only sign of life within the otherwise inhospitable surroundings. The quintessential mountains of southeastern Spain linger in the distance.

The beauty of images like this one lies in their quiet contemplation. While each photograph in Once Upon A Time In Almería possesses its own distinctive subject — whether that be an abandoned or repurposed movie set, Almería’s natural landscape, or older ruins in the province — all are united by a heavy sense of solitude and memory of what once was. 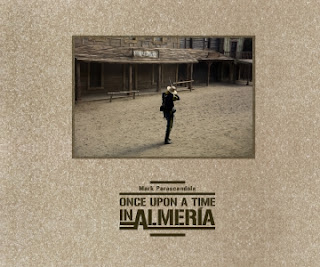 Once Upon A Time In Almería by Mark Parascandola is out now from Daylight Books.
Posted by Tom B. at 6:18 AM