Who Are Those Composers ~ Roy Budd 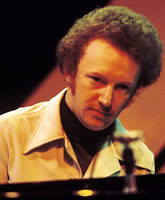 Roy Frederick Budd was born in Surrey, England on March 14, 1947. Budd became interested in music from an early age and began to play the piano when he was two, initially by ear and then by copying various melodies he heard by listening to the radio. When he was six, two Austrian music experts visited him at home and after various tests, found that he had perfect pitch. In 1953, he made his public concert debut at the London Coliseum. By the age of eight, he could play the Wurlitzer organ and four years later he was appearing on television at the London Palladium. Although widely thought to be a self-taught pianist, he did also receive piano lessons from a lady called Mrs. Sax.

He formed the "Roy Budd Trio" with bassist Peter McGurk and his cousin, drummer Trevor Tomkins before leaving school and embarking on a career as a jazz pianist. Roy later reformed the trio with Tony Archer or Jeff Clyne on bass and Chris Karan on drums. Clyne was later replaced by Pete Morgan, creating a line-up that was maintained until his death.

Budd's film work in the eighties included the scores for “Mama Dracula” (1980), “Field of Honor” (1986), and Picha's adult cartoons “The Missing Link” (1980) and “The Big Bang” (1987). Returning to his first love, he played regular jazz shows at Duke's Bar in Marylebone, London, partnering with veteran harmonica player, Larry Adler. He also arranged for and accompanied such artists as Bob Hope, Tony Bennett, and Charles Aznavour.