Who Are Those Composers ~ Franco Brocardi 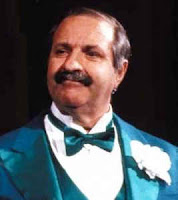 Franco Bracardi was born in Rome, Italy on May 16, 1937. He began his artistic career in the music field, as an accompanist, composer and small impresario. He was quite successful, in the 1960s, with the The Flippers complex, alongside Lucio Dalla. In 1970 he joined the editors of the program ‘Alto gradimento’, in which he mainly dealt with writing radio gags, together with Renzo Arbore, Gianni Boncompagni, Mario Marenco and his elder brother, the famous comedian Giorgio Bracardi. He remained working as an author at RAI for over ten years, also taking care of the ‘Discoring’ program. He was also conductor on minor television programs, under the name of Solforio.

In 1972 he recorded a 45 rpm record with the quintet NU Orleans Rubbish Band, which was composed not only by Bracardi on the piano, but Fabrizio Zampa on drums, Mauro Chiari on bass, Massimo Catalan to the trombone and Renzo Arbore on the clarinet; this group published a 45 rpm record, containing ‘She was Not an Angel’ and ‘The Stage Boy’, recorded by the five.  He was the author of the music of "Strapazzami di coccole", written by Gianni Boncompagni and interpreted by Topo Gigio.

His greatest fame was due to his twenty plus years participating on the ‘Maurizio Costanzo Show’ where he played the role of the pianist who was entrusted with the task of stressing, dampening and improvising the difficult or salient moments of the show. In the cinema he played an interesting character figure, used in many films, especially in the 1980: we remember him mainly in the role as Lino Banfi 's cousin in the comedy "Vieni avanti cretino" (1982), directed by Luciano Salce .

As a composer he had much successes with Raffaella Carrà (A far l'amore comincia tu, Ballo ballo, E salutala per me, Pedro, Forte forte forte, Black-cat), with whom he played pleasant duets on the television variety show ‘Fantastico tre’ in 1982. He also wrote songs for other performers: his song "Bambina mia" (composed with Anna Rita Della Rosa with lyrics by Gianni Boncompagni and Daniele Pace ) was recorded for Armonium. He scored the Europ-western “...Altrimenti vi ammucchiamo” (Kung Fu Brothers in the Wild West) in 1973 using the alias Franco Brocardi.

Franco Bracardi died in Rome on February 27, 2005 following an illness.