The new Winnetou in Winzendorf 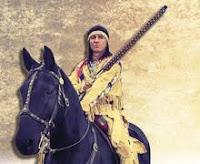 [The current advertising motif of the Winzendorfer Karl May Festival already shows a first photo, on which the new Winnetou of the Lower Austrian stage can be seen. (Photo: Festival Winzendorf)]

The Karl May Festival in Lower Austria Winzendorf will show in the 2018 season not as previously intended "Winnetou II", but the play "Winnetou & Old Shatterhand", released after Volume 35 "Under Vultures" from "Karl May's Collected Works" of Karl -May Publishing (KMV). Martin Exel, operator of the stage, producer and one of the first actors of the Austrian festival scene à la May (formerly even villain or Winnetou in Gföhl) on the subject in the KARL MAY & Co. conversation: "I decided against 2018 because of an important change of direction To play 'Winnetou II'. "

In this context Exel unveiled the secret for the first time, of who succeeds the long-time Winzendorfer Winnetou actor Sascha Hödl, who recently worked at the Vienna State Opera: "Our chiefstuntman and 'Mahtah' actor from the previous year Josef Schützenhofer will assume the role of Winnetou in 2018 "Exel told KARL MAY & Co." Joseph Carl Schützenhofer is a stunt professional and Kaskadeur and has already collaborated with Mario Luraschi, a well-known artist from numerous international shows and film productions, who also has a multi-faceted May story (including Elspe, Winnetou). Tour, Vienna). Also he participated in the new Winnetou film project of RTL, Rat Pack & Co. Schützenhofer.

The material known from the KMV title "Unter Geiern" will be prepared by the Austrian author Fritz Schindlecker for the Winzendorfer Bühne. Exel: "Schindlecker is the author of historical novels and Karl-May-Kenner, and he has also taken care of the last two productions to our fullest satisfaction."

The staging "Winnetou & Old Shatterhand" can be seen on the covered stage in the quarry Winzendorf (near the Hohe Wand / Lower Austria) from August 4-26, 2018. Performances start on Fridays and Saturdays at 7pm and Sundays at 5pm. Further information at www.festspiele-winzendorf.at
Posted by Tom B. at 6:09 AM