Robert Woods, because he was 6-foot-5, hass said he seldom had a stunt double, including such dangerous feats as  being dragged by a horse and wrestling a bull. He told me the bull used in “Gatling Gun was a young bull and much smaller than you imagined seeing on the screen. 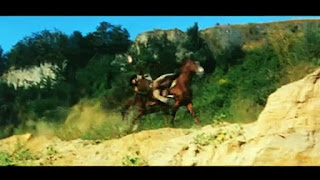