Special to The Poughkeepsie Journal
By Larry Robinson
December 12, 2017

Every so often an obscure channel on the vast upper regions of my remote rewards and surprises me.

This time it was the outlet called "Movies," running the uncut theatrical version of Sergio Leone's mega spaghetti Western "Once Upon a Time in the West." Best four hours I've spent before a TV screen in ages!

Released here in 1969, theater owners whined that the film's extreme running length cut down on daily showings and ticket sales, so the movie was edited without any concern for character or plot development. All we got was a disjointed series of gunfights.

For example, Charles Bronson exits a train, pulls his Colt, plugs three guys. Bronson himself then drops. Killed so soon? Wounded? Playing possum? Did he call in sick for the rest of the filming?

Leone created a carefully crafted overture (some might call ponderous) in which the bad dudes take over a desert depot. We see them set, wait, sweat, load their guns, sit and sweat some more. Two of the three are genuine cowboy movie legends: Jack Elam and Woody Strode. Mostly all we hear is the buzz of a fly and the creek of a dying windmill. Then Bronson, called "El Bruto" in Italy, makes his gunslinging entrance.

Jason Robards gives a fine performance as the roucous Cheyenne, a frontier rogue. We see him arrive, in grand style, and then vanish. We Americans didn't get his majestic death scene or his byplay with Claudia Cardinale, who dubbed her own voice, into English, and was just fine.

Nothing could harm Henry Fonda's freezing Frank; a gunman so totally evil he kills kids, betrays his gang, ravishes a widow, tortures a cripple. Reportedly Fonda was convinced to take the role by Eli Wallach, after he told Fonda how much he enjoyed making Leone's classic, "The Good, The Bad and The Ugly." Fonda is so nasty it's hard to recall he once played Wyatt Earp and Abe Lincoln!

Bronson instantly entered the hallowed halls of Western genre iconography as "The Man With the Harmonica." He hangs the instrument around his neck, usually only playing it when Frank comes around. Branson has few words, but that's OK. Like all Leone antiheroes he "is a man with something to do with death." His climactic showdown with Fonda is operatic and stylized.

Leone filmed most of "Once Upon a Time in the West" in Almeria, Spain, but did take cast and crew to Utah's staggering Monument Valley; perhaps his homage to director John Ford, a major influence on Leone.

Ennio Morricone's music is my favorite of all the scores he wrote for Leone Westerns. The haunting motif composed for Cardinale, "Edda's Theme," is now in the repertoire of many major symphony orchestras worldwide. I heard it in Royal Albert Hall, London.

Leone made one more Western, produced another and then directed the brilliant gangster movie "Once Upon a Time in America," an equal to either "Godfather" film. At the time of his death, Leone was said to be planning an epic about Stalingrad, with the Soviet Army. I can only imagine! 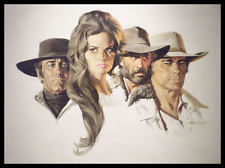