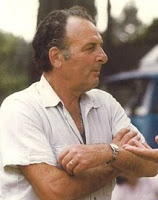 Italian producer Manolo Bolognini died of an apparent heart attack at his home Via Cassia in Rome, Italy today December 23rd. He was 92. Born in Pistoia, Tuscany, Italy on October 26, 1925, he was the brother of director Mauro Bolognini and the the producer of such films as “The Gospel According to Matthew”, “Django”, “Viva, Django”, “Texas, Adios”, “Boot Hill”, “The Forgotten Pistolero”, “Little Rita in the West”, “Keoma” and “California”.
Posted by Tom B. at 11:07 AM