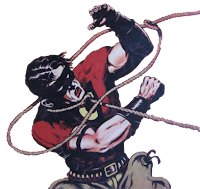 Big-Bill Bill was a muscular and athletic masked hero who worked in the Far West and was more like a modern day super hero who lived in the Wild West. He was always present where trouble was brewing and arrived just in time to save the day.

Big-Bill was published by Giovanni De Leo for the publishing company Edizioni Avventura, and was distributed every two weeks from December 14, 1958 until June 28, 1959. For a total of 6 issues. Each issue was 144 pages and printed in a black and white format

This was a re-edition of the adventures of BIG BILL in an "elongated strip" format. The small volumes were a supplement to BIG BILL n. 41 (May 15, 1950) and the reprint, contained three episodes each, nos. 1/19 in non-chronological order. Texts and drawings by Atelier Chott. Original covers by A. Chott and Gallieno Ferri. 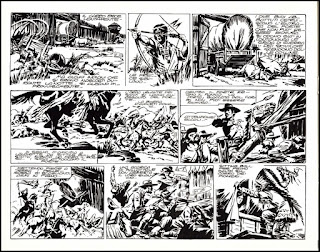 Pierre Mouchot was born in France on June 7, 1911 and is best known under his pseudonym Chott. He was head of one of the biggest French publishing houses and art studios of pocket comic books, or so-called "Pétits Formats".

He started out creating comics in 1940 for publications of the Sagédition, such as Aventures, L'Aventure Réunis and Jumbo, Jumbo. From 1944, he did cover illustrations for the collections Jeunesse Nouvelle and Victoire. During the War, Chott worked for the S.E.T.L., contributing to Cendrillon and Pic et Nic, while also creating short stories for Sélection le Corsaire, Récit Complet des Sélections le Corsaire, Récit Complet des Sélections Pic et Nic, Cow-Boy and Texas Bill. Chott was also present in the collections Les Aventures Fantastiques (Ed. Sprint, 1945) and Les Héros de l'Aventure (Ed. Léo, 1947).

Between 1947 and 1949, he made the comics 'L'Or des Omahan', 'Mowg Fils de la Brousse' and 'Buffalo-Bill' for the Belgian magazine Wrill. At this time, Chott often made things easier for himself by simply copying pages of American artists, like Harold Foster or Alex Raymond.

While Chott remained a productive illustrator of covers for his publications, he assembled a team of artists around him to do most of the interior art. Among the co-workers of the Atelier Chott were the artists Bob Roc, Bertrand Charlas, Rémy Bordelet, Claude Bordet, André Rey, Maurice Besseyrias, Guy Lebrun, and the scriptwriter J.K. Melwyn-Nash (Marcel Navarro).

The comics that were produced by Chott and his studio were characterized by their extreme realism and violence, which was very unusual at the time. This led to several confrontations with the Law. Pierre Mouchot left the comics field in the early 1960s and died a couple of years later.