Who Are Those Guys? - John Bluthal 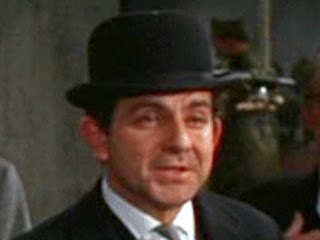 John Bluthal was born on September 2, 1929 in Jezerzany, Galicia, Poland. He immigrated to Australia with his family in 1938 at the age of nine. Bluthal was educated at Princes Hill State School in Carlton North and subsequently studied drama at the University of Melbourne, and visited England, during which time he appeared in pantomime. He worked in repertory theatre in Melbourne and was also involved in broadcasting. Bluthal appeared in drama and variety on ABC radio, including ‘The Shell Hour’ and ‘Gaslight Music Hall’ (which he devised, produced, and starred in).
He moved to England in 1959 where he appeared in ‘Citizen James’ for BBC television, and in the long-running UK TV series ‘Never Mind the Quality, Feel the Width’ in which he played Manny Cohen, a Jewish tailor in business with an Irishman in London. Also in the early 1960s, he provided the voice for Commander Zero in the television puppet series ‘Fireball XL5’. He appeared in the role of Fagin in the musical “Oliver!” at New Theatre, London.
Bluthal also worked with Spike Milligan over several years, appearing with him in a 1958 Australian television special, ‘The Gladys Half-Hour’. He appeared as several characters in Milligan and John Antrobus' stage play “The Bed-Sitting Room”, which opened at the Mermaid Theatre in 1963. He also worked with Milligan on the television series ‘Q’ and its radio counterpart ‘The Milligna Show’. He previously worked with Milligan in the radio comedy series ‘The Idiot Weekly’ and ‘The Omar Khayyam Show’. Bluthal is a man of many voices, like Milligan's former radio colleague Peter Sellers, and he was used somewhat like Sellers in Milligan's later work. Bluthal also appeared in episodes of the Thames TV series ‘Reilly, Ace of Spies’.
In 1975, Bluthal took the part of Richard Armitage, in ‘The Melting Pot’. This was a sitcom written by Spike Milligan and Neil Shand, which was cancelled by the BBC after just one episode had been broadcast. Bluthal the appeared as "Chalky", a hospital patient, in the episode ‘I Gotta Horse’ of the comedy television series ‘Doctor Down Under’.
His films appearances include: “The Knack ...and How to Get It” (1965), three Carry On films, two of the Doctor films, and also “The Beatles' films A Hard Day's Night” (1964) and “Help!” (1965), three roles in “Casino Royale” (1967), and two of the Pink Panther films. Bluthal also played several characters in “The Great McGonagall” (1974), by Spike Milligan and Joseph McGrath, based on the life of William McGonagall. He portrayed an Egyptologist in the year 1914 for the first part of the film “The Fifth Element” (1997), Uncle Karl in “Dark City” (1998), and in the comedy “Beware of Greeks Bearing Guns” (2000).
His work with the National Theatre London included roles in, “Tales from Hollywood”, “Entertaining Strangers”, “Antony and Cleopatra”, “Yonaadab”, “The Tempest”, “Winters Tale”, and “Cymbeline”.
His latest appearances in TV have been in the sitcom ‘The Vicar of Dibley’ as the fastidious minutes-taker Frank Pickle and as the caretaker Rocko in ‘Spirited’. He also appeared in the 2004 film “Love's Brother”.


John Bluthal died on November 15, 2018 in Australia.
John appeared as Martinelli in the 1969 Euro-western “A Talent for Loving”.