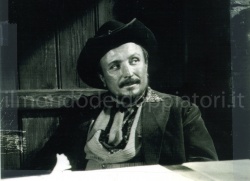 Italian actor, singer and voice actor Sergio Tedesco died on June 3, 2012 in Perugia, Italy after a long illness. He was 84. Born on April 23, 1928 is La Spezia he debuted at the age of 9 in 1938 on stage in a concert. The following year he took part in five films, “Il bazar delle idee”, “La forza bruta”, “Serata di gala”, “Amore imperial”, “L'angelo bianco” - among others directed by Anton Giulio Bragaglia, alongside players like Claudio Gora, Rossano Brazzi, Joseph Porelli, Ferida Luisa, Maria Mercader. At the same time began his career as a voice actor, dubbing himself and lending his voice to those of children. At the same time he joined the Choir of Choirs at the Opera of Rome taking part in prestigious productions such as Carmen, or playing solo roles as the Shepherd in Tosca or The Child in the mine, from the Triptych of Mule, and singing as a soloist at the wedding of Joan of Savoy with King Boris II of Bulgaria. In 1946, after graduating from the Art Institute he debuted as an actor of plays in As you like it by William Shakespeare, directed by Luchino Visconti. At the same time he adds to his resume radio plays and is engaged for 5 years at Musical Comedy Theater of the RAI. At seventeen he entered the Academy of Santa Cecilia where he studies with Armando Piervenanzi and Toti Dal Monte, winning the competition of Spoleto in 1956. He would go on to sing in all the major Italian theaters, Europe and South America, including, Civic Parma, Reggio Emilia in Verdi, Town of Florence, City of Bologna, Bregenz, Cologne, Paris Opera, National Theatre of San Paulo in Brazil and many others. He worked with films directors such as Luchino Visconti, Giorgio Strehler, Franco Zeffirelli, Anton Giulio Bragaglia, Mauro Bolognini, Bruno De Simone, Pierluigi Pizzi, Goofy Crivelli, Gino Landi, Sandro Sequi and Emanuela Giordano, Mario Lanfranchi. He shared the last 17 years with Simon Edwards, his pupil and biographer. Tedesco appeared in one Euro-western “Gun Shy Piluk” (1968) playing the sheriff. Tedesco was also the Italian voice of Domingo Antoine in “Duck You Sucker” (1969). He was the father of actress Paola Tedesco [1952- ] and producer, screenwriter Maurizio Tedesco.