Continuing with Spaghetti western locations from “Duck You Sucker”. The cave scene where Sean finds his followers and family massacred was filmed are the caves of Palazzolo in Italy, were transformed into the caves of San Isidro, a refuge chosen by the rebels to escape the Mexican government troops, but which actually becomes a death trap. Having decimated the enemy army, through the mining of the bridge, John and Juan finally reach the hideout of the revolutionaries, but waiting for them is a sad discovery. The rebels, many of whom are themselves political prisoners released reluctantly by Juan from The Bank of Mesa Verde where they were locked up, were brutally massacred by enemy troops. Among the victims was the father of Juan, and all his five children. This is one of the most intense and harrowing sequences of the film, as well as more significant (the massacre of his family finally convinces Juan to join the cause of the revolution), with the famous tracking shots of Leone showing tangles of dead bodies piled up in the hollows of the caves . A sequence made ​​even more poignant by the sweet music of Morricone and photography that makes it warm and enveloping nearly unrecognizable the charming landscape of the Castelli Romani. In the caves was to be another sequence, cut during the final assembly, showing the revolutionaries meeting confused and worried after the attack at the bridge.

This grotto is located near the outskirts of Rome. 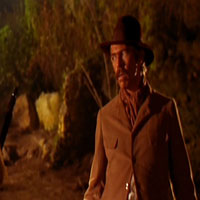