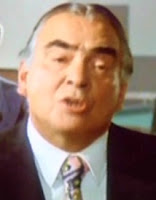 Nino Vingelli was born June 4, 1912 in Naples, Italy. Vingelli at first worked in the theater, making his debut in cinema during the Second World War in “I mariti” (1941) starring Amedeo Nazzari. Nino was a good dramatic actor, with a dry and composed style. After the war he became a very effective character actor in both comedic and dramatic roles. Among the many movies he made several standout “La legge” (1959), he played the character Pizzaccio with a lot of color; “La Sfida” (1958), where he was a vigorous and dry Gennaro; “I magliari” (1959), where he appears in the guise of Vincent. With his sometime surprising skils Vingelli emerged as one of the best actors of the recent Italian cinema. He was especially good in parts of Neapolitan cunning, often unscrupulous and other times a tender-hearted and good companion. Vingelli appeared in over 130 films among which were nine Euro-westerns from “The Lost Treasure of the Aztecs in 1964 to “Drummer of Vengeance” in 1971. Vingelli died on March 26, 2003 in Rome. Today we remember Nino Vingelli on what would have been his 100th birthday.