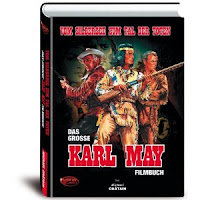 "From Silver Lake to the Valley of the Dead - The big Karl May-movie book," edited by Michael Châtain, with guest contributions from Stefan von der Heiden / Berlin and Christian Hees / Dortmund, appears early in the anniversary year of the Karl May Filmwelle1962 - 1968.
All films since 1920, are treated to 460 pages and more than 1,200 pictures, with content and history.

In addition, the biographies of the key actors, producers and people involved are included. Another exciting aspect is that all German and most of the foreign official advertising, are presented for the first time this wealth of information for the avid movie fans sometimes in large format.

A great addition to all previous releases, especially for interested die-hard Karl May fans and film buffs/

The Karl May movies for decades were the most popular film productions of the united Germany and for a large number of die-hard movie fans not only in this country, but also from neighboring countries, like Austria, Switzerland, the Czech Republic, Poland, France and Italy.

Cinematic tracks are traced back to the silent era from 1920, until 1959. Six films were made in 1936 with “The Desert” being the first talkie, two more films after the war were filmed in color - with limited success.

Between 1962 and 1968, a total of 17 Karl May films in the new series by successful producer Horst Wendland in addition to that of the Edgar Wallace films of the ‘50s and ‘60s, met with great expectations and success for an ailing film industry and made it flourish again.

Even half a century after the first shots of this film series and the Rialto and CCC films, the charm of these movies bring nostalgia and happiness to the film viewer.

The fact that this "phenomenon" in the last 15 years on from countless publications, reference books, biographies, and major stakeholders make clear, on the one hand, the significance the films of the West German film industry had. The second is how much interest people even today who still encounter these films in all kinds of shapes, and backgrounds, want to find out information on them.”