Who Are Those Guys? - Adolfo Belletti 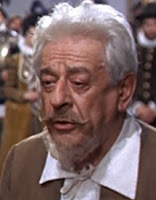 Adolfo Belletti was an Italian character actor probably born around 1910. Among his most interesting works was his participation in the movie “State buoni se potete” (1983) by Luigi Magni. In 1983 he also worked with Pupi Avati in the making of the film “Zeder”. Belletti appeared in 30 films from 1958 until 1984. He appeared in only one Euro-western “Full House for the Devil” (1968) with George Hilton. Adolfo is the father of actress Nuccia Belletti [1935-1971].