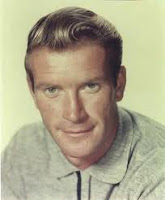 Kenneth Donovan Clark was born on June 4, 1927 in Neffs, Ohio. Beginning as a model for physique model and appeared in several magazines and advertisements. Clark signed with 20th Century-Fox and appeared in a string of popular films during the 50s and 60s. In 1956, his busiest year, Clark appeared in five films, mostly westerns for Fox. However, by the late 1950s Fox dropped many of its contract players, including Clark. He then went into low-budget sci-fi films, such as “Attack of the Giant Leeches” (1959) and “12 to the Moon” (1960), while also appearing in quite a bit of television, even shooting a television pilot called “Brock Callahan” but the series was not picked up for broadcast. In the mid-1960s Clark followed many of his fellow American actors to Italy and appeared in several very popular spy thrillers and spaghetti westerns. His three starring westerns were “The Road to Fort Alamo” (1964), “Savage Grinto” (1966) and “A Man Called Sledge” (1969). Ken remained in Italy to act in films and television programs racking up 50+ during his 40+ year career. Clark passed away from a heart attack in Rome on June 1, 2009, at the age of 81. Today we remember Ken Clark on what would have been his 85th birthday.