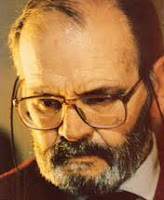 Lucio Fulci was born on June 17, 1927 in Rome, Italy. Fulci was an Italian film director, screenwriter, and actor often referred to as ‘The Godfather of Gore’. He is perhaps best known for his directorial work on such Horror films, as “ Zombi 2” (1979) and “The Beyond” (1981), although he made films in genres as diverse as giallo, western, and comedy. Fulci directed three Euro-westerns: “The Brute and the Beast” (1966), “Challenge to White Fang” and “Four of the Apocalypse” (both 1974). Lucio is the father of actress Antonella Fulci [1960- ]. Fulci died from diabetes on March 13, 1996 in Rome. Today we remember Lucio Fulci on what would have been his 85th birthday.