THE MAN FROM THE CURSED VALLEY 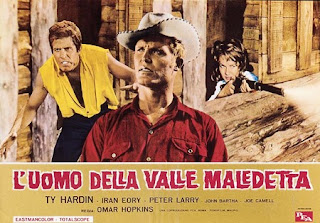 Gwen is married against the wishes of his father Burnett, to an Indian named Torito, and live with  his tribe. An enemy tribe kidnaps Gwen, but she escapes and is rescued by Johnny, a cowboy who, after having made ​​sure Gwen is alright goes to Burnett to convince him to let his daughter recover from the ordeal at his home. Gwen, meanwhile, has been found by Torito which leads her to his hut where they are joined by Burnett and Johnny. Torito refuses to go live on Burnett’s ranch and Gwen decides to return alone with her father. The two are accompanied by Johnny who realizes that Gwen really loves her husband and decides to return to Torito to induce him to follow his wife. Meanwhile, the tribe of Indians who had kidnapped Gwen attacks Burnett’s ranch, who, after a violent battle, is killed with all his men while Gwen is kidnapped again. After another adventure, she is freed by Johnny and Torito.

YouTube link: http://www.youtube.com/watch?v=olFqIoBU-MM
Posted by Tom B. at 6:04 AM