Who Are Those Guys? - Milan Beli 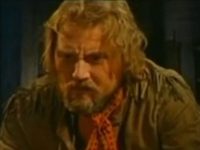 Milan Beli was born on September 20 1932 in Konjane, Serbia, Yugoslavia. After his basic education, he began studies in Belgrade’s Sport University. During these studies he made his ​​first contact with film, it was during this time that Yugoslavia was the location where, many international adventure movies and westerns were filmed, the extras were mainly students from the university. In 1957 he acquired his first small film role in the French-Yugoslavian adventure film “Burlak”. Beli not only speaks his native language but also English, German and French, so in 1968 he accepted a film contract from DEFA. He appeared as a villain in three DEFA Indian films which made ​​him well known in East Germany. In addition, he also worked as a choreographer for the dance scenes in Konrad Wolf's 1971 film “Goya - oder Der arge Weg der Erkenntnis” an historical epic, as well as a performer in the DEFA science fiction film “Im Staub der Sterne” (1976). This film was a milestone as it was his 50th Film production. Beli’s last film appearance was in the 1983 DEFA western “The Scout” starring Gojko Mitic.