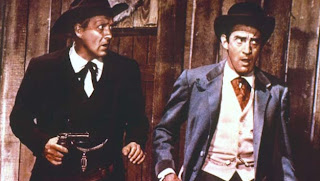 Raimondo Vianello was born in Rome, Italy on May 7, 1922 but spent his youth in Pula, where his father, Admiral of the Regia Marina directed the local naval academy. During World War II, he joined the Italian Social Republic, the fascist puppet state established in northern Italy after the Allied invasion of Italy. He was captured by American troops. In 1958 he met actress Sandra Mondaini [1931-2010], whom he would marry four years later, and with whom he frequently appeared in TV shows during his whole career. His first famous partner on the small screen was Ugo Tognazzi with whom, starting from 1954, he hosted the satirical show “Un due tre”; the show was cancelled in 1959 after the duo performed an ironical sketch about the then-president of the Republic, Giovanni Gronchi. Vianello. Raimondo then moved full-time to the cinema, appearing in a total of 79 films between 1947 and 1968. During his film career he appeared in six Euro-westerns from “The Magnificent Three” (1961) to “Rebels on the Loose” (1966). In the 1970s he returned to RAI (the Italian state broadcasting company, then the only one existing) with a series of Saturday shows which made him and Mondaini extremely popular as hosts and authors of sketches. During his TV career Vianello also hosted quiz shows, such as “Zig Zag” on RAI and “Il gioco del 9” on Canale 5; he also hosted the 1998 edition of the Sanremo Music Festival and, from 1991 to 1999, “Pressing”, Mediaset's Sunday night sports talk show. Vianello died from kidney failure on April 15, 2101 in Milan, Italy. Today we remember Raimondo Vianello on what would have been his 90th birthday.