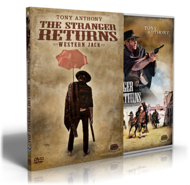 By Tom Betts
The Stranger Series has always befuddled me. When I first saw “A Stranger Returns” in the theater it turned me off to Spaghetti Westerns. It wasn’t until I interviewed Tony Anthony some 25 years later did I understand what the concept of this character was all about. Originally I thought Tony Anthony was an alias for some unknown Italian actor. Tony Anthony was born in West Virginia, U.S.A. I didn’t care for the way The Stranger seldom faced an opponent head on like Eastwood did. Tony was portraying a New York City punk who used his head not his speed and accuracy with a gun. I never saw “The Stranger Returns” until some 20 years after it was released. And then the even rarer “The Stranger in Japan” until it was shown on TBS in the early 1990s.

The Stranger Returns story:
After a postal inspector tells a gang of Mexican bandits about an expected stagecoach shipment of gold he is immediately shot to death by the gang. The Stranger (Tony Anthony), a serape-draped drifter who carries a pink parasol and rides a horse named Pussy, finds the man's body, takes his identification card, kills several of the bandits, and rides into Moon Village. En Plein (Dan Vadis), the gang leader, seizes the designated stagecoach, killing the driver and passengers, but discovers that it is a decoy. The Stranger, masquerading as the dead postal inspector, attempts to gain entrance to En Plein's hideout but is ambushed and captured. He learns that Good Jim, a local official, is in league with En Plein to steal the real stagecoach, whose solid gold framework is concealed by wooden panels painted red. The Stranger is tortured by the gang but manages to free himself by cutting his bonds with a piece of broken glass. Good Jim (Daniele Vargas) tries to double-cross En Plein by switching coaches, but his ruse is discovered, and he is murdered after revealing that the real coach is hidden in a cemetery. The Stranger arrives on the scene in time to prevent the rape of Good Jim's daughter, Caroline (Jill Banner). He is then aided by a preacher known as ‘The Prophet’ (Marco Guglielmi ) who sets off fireworks at opportune moments, The Stranger guns down the gang members with a sawed-off shotgun. The Stranger and The Prophet take the bandits' corpses into town and collect a $10,000 reward. Since The Stranger plans to keep the disguised gold coach for himself, he magnanimously gives The Prophet the entire reward. As The Stranger drives out of town, however, fireworks left inside the coach explode and expose the gold framework. Relinquishing the coach to the U. S. Cavalry, The Stranger seeks out The Prophet and reclaims his share of the reward. 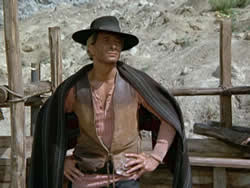 Anyone wanting to see “The Stranger Returns” had to, for a long time find the old VHS tapes or just taped from TV bad U.S.A bootleg DVD. Now the film has been done-up correctly. It's finally available from Colosseo Film & NSM Records have given this film a worthy production.

It’s apparently not clear what format the image was intended by the director (Luigi Vanzi), the package contains both a 1.66:1 version (DISC 1) as well as a full-screen version (DISC 2). There is a 40 minute audio interview with Tony Anthony. The viewer can choose between German, English and Italian dubbed versions (including German subtitles) and view a picture gallery and three trailers. A slipcase makes the publication look very classy. 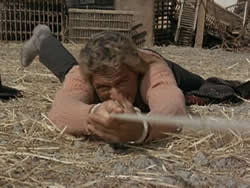 This copy of the film was made from the original negative and is the original length and format and is the clearest, sharpest copy of this film ever available. The entire package has been beautifully done and displays The Stranger in all his glory. This DVD release is not to be missed for all of us who have wanted a good copy of this film to finally be released. This isn’t a good copy it’s a GREAT copy. Bravo Colosseo Film on a job well done. Thanks to Inga Seyric of Colosseo for providing me with a copy of the DVD for review purposes.