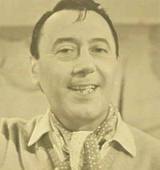 Erminio Macario was born in Turin, Italy on May 27, 1902. He was a popular actor and comedian of Italian theater, film and television. He started his career very young, initially learning the art of mime, and after some years spent at the side of the soubrette Isa Bluette in 1930 started his first act, in which in 1937 received Wanda Osiris, with which it formed a duo of great success. Due to his significant visual qualities and mimicry, and thanks to the presence of Osiris, and always being supported a number of female dancers he quickly became known as just Macario. During the Second World War, Macario also began acting in films, with some success, which eventually lead to his wide popularity as a result of his participation in a film with Toto. His attempt to extend his activities in film success did not however follow. In 1951, a triumphant tour of France was sealed by the presence among the Parisian public of some of the best known personalities from across the Alps. It is said that President De Gaulle had ordered the Macario be escorted by cuirassiers in full uniform. Macario also proved popular on television, producing an excellent interpretation of “The Miseries of Monsù Travet”. Like Moliere, he died on March 25, 1980 in Turin, Italy virtually on stage during the performance of the play “Oplà” the results of a brain tumor. Macario appeared in one Euro-western “The Kid of the West” in 1942. Today we remember Erminio Macario on what would have been his 110th birthday.