The memory of cinema in Polopos 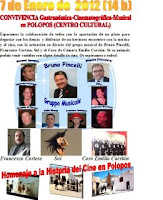 Lucainena City Council of the World Today organized a day of musical and culinary living to spread the cinematic tradition and appearing was the theatrical group of 'Bruno Pincelli'
"The problem was that you go down the street and ask people where is Polopos?, And nobody had a definitive answer. Ignored is the fact the there was, years ago, such memorable actors as Raquel Welch and Burt Reynolds working here." Francisco Rodriguez Moreno, Bruno Pincelli when lecturing on stage or with an Italian accent, explains the importance of the little known treasures of Almeria. So, he sought allies in the institutions, little by little, to encourage a show like they enjoyed today in Polopos. 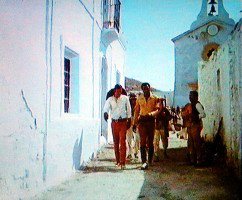 It is a tribute to the movies. For the films that have been shot there and not for another passing year. To those movies that marked the life, love, children ... and is a duel between the participants and the organization. Maria Lazaro Lazaro Mendez and Jose Maria Roda, local councilors, were two of the architects who made this intense coexistence. "We expected the cooperation of all, with contributions of a plate of food to enjoy with others and thus enjoyed a beautiful day of coexistence and encountered a live performance and films made ages ago," as reads the poster.
The idea was born almost by accident. There was at a book presentation in council. There was the mayor of Polopos, María José Lázaro and Francisco Rodriguez. By coincidence, that in life there are many, made ​​them both initiate a relaxed conversation with art as a background. "Our intention from the outset was to seek ways to revitalize this town and for this we relied on the pillars which here is the cinema," says Rodriguez. Two in one, "Gathered on January seventh art, music and literature and here we go." "I spoke with Juan Herrera, and it seemed like a good idea to him and his group also participated." To enjoy only what has been done in the province is the purpose of meetings like this.
"Let's put out chairs, tables and drinks as well as a sample of different dishes together." 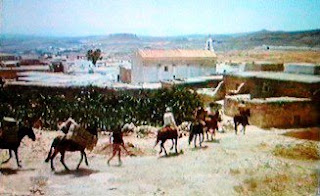 The scenario demanded it. "It is clear that in an event of this kind what is most important are films, music, focusing on some films that were filmed in Almeria, such as "One Hundred Rifles, It is a film shot in Polopos involving Burt Reynolds and Raquel Welch."
The inventive machine was turned on at the time to give birth to what we are now. "We thought that we would become descendants of the Italians, who came to shoot, because we wanted Polopos in Almeria to be known, internationally. It’s true that many people know of what was done here, but inside the town ... we have much to do. Surely no one remembers the important filmmakers who came here." The proposal will mean, "A spur to the town both culturally and economically." 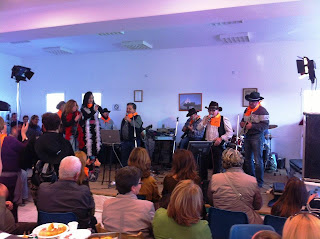 Besides the acting Pincelli Bruno group (which consists of Miquele Friscaletti, Pity, Brochetti Francesco, Francesco Carbonara, Nolo Guess, Alexander Di Fiorenza, Donatella Parmesan and Giovanni Sorrento) the stage was occupied by Francisco Cortés (Francesco Cortese) and the Choir of chamber singer Emilio Carrion and Marisol.
Posted by Tom B. at 11:00 AM