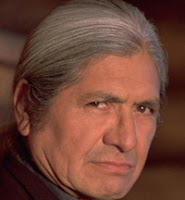 Saskatoon actor, activist Gordon Tootoosis dead at 69
Saskatchewan-born actor and aboriginal activist Gordon Tootoosis has died at the age of 69 after a brief illness (pneumonia). Tootoosis, a Cree from the Poundmaker First Nation, was one of the stars of CBC's "North of 60" television series. His long career ranged from the 1973 film "Alien Thunder" with Donald Sutherland and Chief Dan George to 1996's "Legends of the Fall" with Brad Pitt. Despite his success in the entertainment industry, Tootoosis always made his home on the Poundmaker reserve and used to joke that the movers and shakers in Hollywood knew where to find him. Gordon appeared in two Euro-western TV series "Bordertown" (1989-1991) and "Hawkeye" (1994).
Posted by Tom B. at 7:21 AM