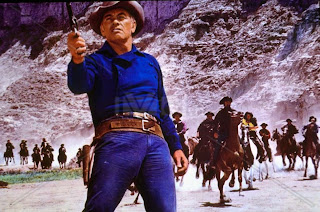 Outlaw Jim Cooper has a problem with his partner Morton during a bank robbery when a man is killed. Cooper is caught and sent to prison for life. In prison he meets the young miner Manuel who was also in the bank during the robbery, innocently withdrawing his savings, and arrested as one of the robbers. Manuel promises Cooper he will lookout for outlaws family once he is released from prison. In the meantime Morton has kidnapped the family and made off with all the money from the robbery. Cooper eventually escapes from prison and goes after Manuel who he thinks has double-crossed him. After realizing his mistake the two team together to go after and settle their differences with Morton.
Posted by Tom B. at 6:49 AM