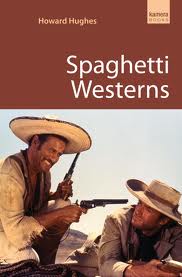 Once upon a time in the west, Clint Eastwood earned himself a fistful of dollars- and instant stardom - when his 'Man With No Name' rode into town. In the mid-sixties Eastwood's Dollars trilogy with director Sergio Leone - A Fistful of Dollars, For a Few Dollars More and The Good, the Bad and the Ugly - gunned down all opposition at the world box office and created a visceral new brand of anti-Western, dubbed 'Spaghetti Westerns' by critics bemused by the films' popularity. Spaghetti Westerns' cynical morality tales of revenge, betrayal and mercenary avarice were filmed in the desert badlands of Almeria , Southern Spain . Eastwood's immortal 'Man With No Name' is the enduring symbol of the genre, but Leone and Eastwood weren't the first, nor the most prolific filmmakers to make Spaghetti Westerns, and this Kamera Guide reviews the best of a wild bunch, including cult classics Django, The Big Gundown, They Call Me Trinity and Navajo Joe.

Spaghetti Westerns analyses the genre, from the most famous offerings - Once Upon a Time in the West and the Dollars trilogy - to offbeat fare, such as Cemetery Without Crosses and Django Kill. It charts the Spaghetti Western careers of Lee Van Cleef, Terence Hill and Klaus Kinski as they rode to international stardom. Maestro Ennio Morricone's groundbreaking Western scores are also appraised. In addition to an introduction to the genre, 34 of the best Spaghetti Westerns are analysed in detail, illustrated with rare colour posters and stills. There is also a multi-media reference section, listing essential books, websites, DVD releases and soundtracks.

The Kamera Guide to Spaghetti Westerns is available as a Kindle download here: