A FEW DOLLARS FOR DJANGO 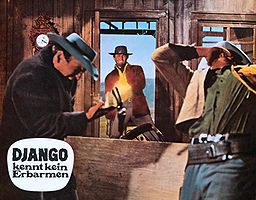 Regan/Django, a bounty hunter is hired by the bank to recover loot stolen by the notorious Jim Norton and his gang of bandits. Without much trouble he manages to track down, kill most of the criminals and return the filthy lucre to it's rightful owners. The only slight problem is that he is unable to capture Jim Norton - who has apparently been murdered in a gunfight elsewhere. Not entirely persuaded by this story, he decides to journey to Montana , where the villain's 'twin brother' Trevor happens to live.

Montana , however, is in the grip of an escalating range war between the farmers, who want to erect barbed wire fences around their land, and the ranchers, who want the right for their cattle to roam freely. Matters are especially tense in Miles City , the town where Regan ends up - mistaken as the new sheriff (and equipped with essential diminutive, alcoholic, cackling deputy).

His workload immediately become burdensome. The ranchers are led by a particularly unappealing individual called Bransbury, whose credentials are cemented by the way in which he regularly twists the ends of his moustache in a caddish fashion. The farmers, suffering from his unpleasant habit of burning down their property, have formed a resistance group, led by. Trevor Norton. Trevor, despite appearances, believes in peace and seems to be an essentially good man; only willing to fight when pushed into having no options. He also has a pretty niece, Sally, to whom Regan soon takes a shine.

Adding to the already complicated story is the fact that Bransbury has also hired a couple of killers, Buck Dago and Sam, who were coincidentally members of the original Norton gang. They realize the new identity of their old boss and are determined to find out what exactly has happened to the money that they helped steal. - Matt Blake

YouTube link: http://www.youtube.com/watch?v=ivqOnb_Nkic
Posted by Tom B. at 6:51 AM