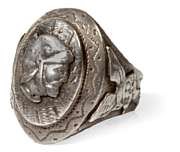 An Eli Wallach ring from "The Good, the Bad and the Ugly" United Artists, 1967. A sterling silver men's ring designed with a image of a Roman soldier's profile in the center; worn by the actor on his ring finger throughout the entire film as he portrayed 'The Ugly' "Tuco." Included is a photocopy of an autograph from the actor reading "For Ricky / With fond memories of Almería / Eli Wallach."

Eli Wallach gifted this ring to the current owner's mother-in-law [Maria Gillinson] when he stayed at her house in Almeria, Spain while filming "The Good, The Bad and The Ugly." Clint Eastwood also stayed at this same house as did John Lennon a year later when he was filming his 1967 film, "How I Won the War;" all three men signed Baron Ricky Gillinson's [Maria's husband] autograph book which is being offered in LOT 7176.