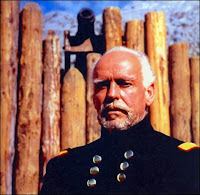 Charles Fernley Fawcett was born on December 2 1915 at Waleska, Georgia, where his mother had been caught in a snowstorm, but came from old Virginia stock. Orphaned by the age of six, he and his younger brother and two sisters were raised by two maiden aunts at Greenville, South Carolina, where he acquired the old-world manners of a typical southern gentleman.

In 1937, having run away from Greenville senior high school, where he had learned to wrestle and to play American football, he made his way to New York and then Washington DC, where a cousin happened to be the US assistant postmaster-general and took him in. Fawcett then jumped a series of tramp steamers, working his passage through the Panama Canal to the Far East before returning to the United States. Gifted with an artistic talent and a musical ear, he received tips on playing jazz trumpet from Louis Armstrong, and on grappling from a professional wrestler, with the result that Fawcett, still restless, spent a year in eastern Europe earning a living by fighting in back-street theaters.

When the Nazis invaded Poland in 1939 Fawcett joined the Polish army but had been in barracks for only a week before escaping from the advancing Nazis and hitchhiking back to Paris. When the French rejected his application to enlist, Fawcett joined the Section Volontaire des Américains - the ambulance corps. He was sharing a studio with another young American, Bill Holland, whose mother was a German aristocrat. One of Holland's relatives, General Otto von Stülpnagel, had been appointed commander-in-chief of occupied France, and when Holland introduced Fawcett to senior German officers he was able to pass important information to the French Resistance. In Paris Fawcett also took part in the rescue of a group of British prisoners-of-war who had been placed under French guard in a hospital ward by the Germans. In 1942 he joined the RAF and trained as a Hurricane pilot but was invalided out that Christmas with tuberculosis, from which he had suffered as a youth. After convalescing in a Canadian sanatorium, Fawcett decided to make his way back to the United States. From New York he travelled to a TB clinic in Arizona where he remained for about a year. In 1944 he returned to Italy and rejoined the American ambulance corps. For six months in 1945 he fought with the French Foreign Legion in the forests of Alsace, and took part in the liberation of Colmar. A further bout of tuberculosis landed him in the Legionnaires' Hospital in Paris, and although he applied to rejoin his regiment, Fawcett was turned down.

In three months at the end of the war, Fawcett married six Jewish women who had been trapped in concentration camps, a procedure that entitled them to leave France with an automatic American visa. By 1948 Fawcett was back in action, this time against the Communists in the Greek civil war, fighting in a lounge suit in the guise of a journalist, since no foreigners were supposed to be involved. The following year, he returned to Paris and began his career as an actor, working in the theatre, radio and films. During the next 25 years he appeared in two films with Sophia Loren, knew Orson Welles and William Holden, and in Rome - between two of her six husbands - became the lover of Hedy Lamarr.

In 1956 he spent three months helping to rescue refugees from the Hungarian uprising and, following riots in the Belgian Congo in 1959, joined a friend with a private plane in missions to rescue people who had become trapped and unable to escape the fighting.

After the war, he pursued a cinematic career, in which he performed in over 100 films, working with such stars as Errol Flynn, Alan Ladd and Robert Taylor. He combined this with smuggling refugees to safety from civil conflict, organizing earthquake relief teams, fighting in several wars, and co-founding the International Medical Corps. In the 1960's he appeared in such films as “Barabbas” (1961), “The 300" Spartana” (1962) and his only Euro-western “Old Shatterhand” (1964) as General Taylor and the Gaucho film “Savage Pampas” (1966). Fawcett made his last two films in the mid-1970s, playing the lead in one and in the other, Up The Antique Stairway (1975), supporting Marcello Mastroianni.

Later in the 1970s, short of money and in poor health from a recurrence of tuberculosis, Fawcett accepted an invitation from an old friend, Baron Ricky di Portanova, a wealthy figure in Houston's high society, to supervise the building of a huge new swimming pool complex at his mansion. Fawcett moved in, and although his new billet afforded access to the best doctors in Houston, he failed to settle. In June 1979, when the Soviets invaded Afghanistan, he announced that he was leaving for that country to pass on to the Afghan resistance fighters tactics he had learned in the Foreign Legion.

He spent the rest of his life in Chelsea, London with his wife April Ducksbury. Here he acquired a taste for music, and wrote songs. In 2006, Fawcett was nominated for recognition as Righteous Among the Nations at the annual British Holocaust commemoration. He died in London on February 3, 2008 at the age of 92. Today we remember Charles Fawcett on what would have been his 95th birthday.
Posted by Tom B. at 6:26 AM