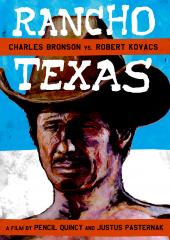 Charles Bronson. He is alive. He is working hard. And he is ready for the final showdown.
A dusty ranch in the blazing sun. Charles Bronson puts on his Stetson and walks out to feed the horses. Yes, this is definitely the right man in the right place.

But something is wrong here. Where is the enemy?

Is this really the crime-fighting vigilante we all know from Charles Bronson's classical movies?

But this is not Hollywood- this is the shocking reality of RANCHO TEXAS, captured by Pencil Quincy and Justus Pasternak in their straightforward documentary film!