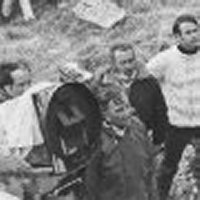 Alana, daughter of Vidal, stated that her father died, "of a heart attack while asleep" on Sunday, December 5, 2010 and his remains were cremated at the cemetery in Pozuelo de Alarcón (Madrid).

"He was passionate about life, funny, witty and delighted with what he had done, plus a taste for jazz and bossa nova. He came to this world as a gentleman and has been bein a gentleman," she stated.

Vidal, who was born in Paris in 1926, always lived in Madrid, was the first assistant director of big Hollywood names such as David Lean, Stanley Kramer, Nicholas Ray, Orson Welles and Joseph Mankiewicz.

Vidal worked on major Hollywood productions as "Mr. Arkadin" by Orson Welles, "Dr. Zhivago" by David Lean, and "The Pride and Passion" by Stanley Kramer. He was a friend of Ava Gardner, and an intimate of one of her husbands Frank Sinatra.

Despite his advanced age the late filmmaker was recently involved in Isaki Lacuesta’s documentary "The Night that Never Ends," a production of TCM based on the book of Mark Ordonez "Drink of Life: Ava Gardner in Spain" and presented last September at the Festival of San Sebastian. Lacuesta recalls in the film's production notes that Vidal, "a splendid type, extraordinary, writer of film and jazz", met at a Cannes Film Festival Welles, who shared the same zest for life. Welles said he was going to shoot a film in Spain, "Mr. Arkadin" and was seeking an assistant director, to which Vidal responded that he had no idea how a movie was filmed. "Cinema is learned in twenty minutes if you're an idiot. If you are normal, in ten and you know everything," replied the director.

The film was encouraged to be made in Spain, and so there the movie was made with Vidal as assistant director, from there, he was first assistant on "55 Days at Peking," "Lawrence of Arabia" and "Dr. Zhivago”.

The last movie he did, added his daughter was two years ago in the United States, where he shot "I Love Miami." Vidal worked on three Euro-westerns: assistant director on“The Desperados” with Jack Palance and Vince Edwards, “The Valley of Gwangi” both in 1969 and as producer on “Four Rode Out” (1970).
Posted by Tom B. at 7:04 AM