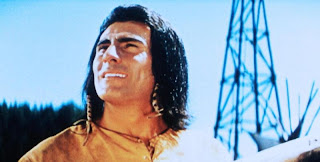 At the end of the 19th century, the Wyoming Oil Company has established a location in the vicinity of Wind River City at the foot of the Rocky Mountains, where they have been illegally pumping oil from Indian territory. One of the company's greedy agents, Mike Allison, kicks out both his white partners and the Indians. He has his some of his associates secretly murdered and blames it on the Indians, who are then killed when they get in the way of his plans. Five chiefs with lifelong shares in the Oil Company die mysteriously as a result. The young chief Shave Head asks his a half-blood brother Chris Howard for help. Chris assumes the post of deputy sheriff and tries to expose Allison and the murderers. When a representative of the Oil Company turns up in Wind River City and exposes Allison's plot, the white inhabitants begin to take sides. Allison does his utmost to defend himself and finally has the oil camp set on fire, passing it off as an act of revenge perpetrated by the Indians. The Indians are helpless against this accusation and Howard must pay for it with his life.

YouTube link: http://www.youtube.com/watch?v=U-ltbRRaA1k
Posted by Tom B. at 6:15 AM