“Surehand is a friend of the Indians.” Part 2

As in the case with the previous film Winnetou III / Winnetou 3. Teil, the Old Surehand film group settled in the Lev multi-story hotel, which still stands in the center of the Slovenian capital Ljubljana, but now with more glass than concrete. Stuart Granger moved into Lex Barker's former comfortable apartment. And some of the members of the Rialto Film crew, having become a participant in the filming of the next film, did not leave the hotel at all. The first clap of a movie clapper came on the morning of August 23, 1965, 15 kilometers north of Ljubljana, in the town of Stožice. There, on the banks of the Sava River, which originates in the Slovenian Alps, there was a cinematic "cowboy" town set, where by that time they had filmed several Euro-westerns. Just ten days ago, work was completed here on the third part of "Winnetou", in which the city was called Clinton according to the plot. This time the name is more sonorous - Mason City. In the then Yugoslavia, the town of Stozice was reputed to be the most popular. It was used more often than, for example, the "cowboy" city in the Bosnian Zupzi Valley, where it was not so easy to get there, and it was more difficult to bring in extras. Although, according to the testimony of the service personnel, the trips from Ljubljana to Stozica and back turned out to be "still a test for car tires and springs" ... 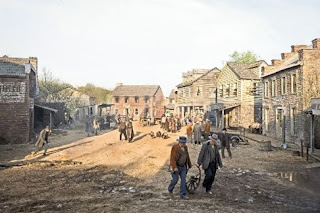 History of the "cowboy" town in Stozica The first buildings appeared here in the summer of 1963. They were built specifically for the German-Italian-French co-production "Pirates of the Mississippi" / Die Flusspiraten vom Mississippi based on the work of the adventurer Friedrich Gerstecker (1816-1872) with Hansjörg Felmi, Horst Frank, Brad Harris and Tony Kendall in the lead roles. At that time, German producers were discovering the theme of the Wild West, rushing to attract viewers on the "May" wave and return them to empty cinemas. Commissioned by the Munich-based company Rapid Film, estimated at 100,000 Deutschmarks, set designers Hans Bertel and Johannes Ott, in close cooperation with specialists from the Slovenian Triglav Film, rebuilt the so-called main street behind a grove by the Sava River - the main street of the tiny town of Helena, based on the plot, which was located in the Arkansas wilderness.

Before the start of construction, there were a couple of buildings here. One of them is a brick house of unknown purpose with stone steps at the entrance, which was turned into a bank by adding a wooden second floor and a signboard MEMPHIS UNION BANK. On the same side of the street, they set up the Sheriff's Office / SHERIFF'S OFFICE and the office of the Dayton Trading Company / DEYTON'S MERCANTILE CO. Across the road are several houses made of planks, knocked together overlapping, as it should be in the Wild West. The largest of them is the two-story UNION HOTEL with an indispensable saloon on the ground floor. In the annex to the hotel, an office for the shop of repaired carriages / CARRIAGES REPAIRED was equipped. During filming, the hotel will almost burn to the ground. In order to prevent the fire from spreading to other buildings, a fire brigade will be called from Ljubljana 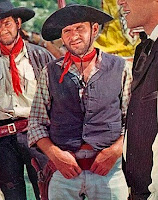 Stuntman Nikola Getz in Pirates of the Mississippi. He will play in "Old Surehand" the "buffalo killer" named Kat Near the hotel, under a billboard sticking out on the roof with the inscription BLACKSMITH'S WAGONS, a storage of mobile forges has been opened. They did not forget about the free-standing shack - the undertaker's workshop with a colorful inscription: "The coffins of Dock Monrove are the best." All the canons of the western were observed - it turned out to be a real provincial village of the times of the Wild West! In the summer of 1964, the German-Austrian western “Heiß weht der Wind” with Thomas Fritsch in the lead role was filmed here, for which they renovated buildings that had decayed over the winter and put together a couple of new wooden houses at the beginning of the street. That year, the town turned out to be so in demand that on the last day of the Germans' work in the same exteriors, shooting began for Italians. There was even a conflict between them due to the lack of extras. For the Italian - more precisely, the Italian-Spanish-French - film group, the Slovenes did a great job: they cleared the space and expanded the shooting location to one more street, placing it perpendicular to the existing one. Now, from a bird's eye view, the town resembled the letter "T". A new short street was built up with houses and a church with a high spire was erected on it, which can later be seen in other films. At the base of the letter "T", the main street was completely blocked off with several more buildings, installing in front of them a street water column with a drain, neatly lined with brick. If earlier this street was completely walkable, now all the entrances to the city have become sideways and practically did not get into the camera during filming, giving the impression that there are more streets than in reality. 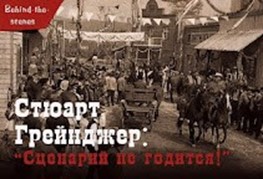 So, in August-September 1964, literally one after another, three spaghetti westerns were filmed here: "Die for a Dollar in Tucson" / Per un dollaro a Tucson si muore, "Damn Pistols of Dallas" / Le maledette pistole di Dallas and "Three Dollars of Lead" / Tre dollari di piombo. The last two are with the same actors. In late autumn, the West Germans dropped in again. This time, the city served as the scenery for the color large-screen film "Uncle Tom's Cabin" / Onkel Toms Hütte based on the novel by the American writer Harriet Beecher Stowe (1811 - 1896) with Herbert Lom, O.V. Fisher, Charles Fawcett, and Mylene Demonjo. Among the participants from the Yugoslav side there were also old acquaintances: Nikola Popovic, Jovan Janichievich, Milan Beli and Gojko Mitic, who played the killer of Lincoln and performed several tricks. There have been no major changes in the scenery since the Spaghetti Westerns. Apparently for economic reasons. Or maybe there was simply no time. Even the name of the saloon remains the same: LONG BRANCH SALOON. They outweighed a couple of signs on the houses, and that's it. In the summer of 1965, the town came to life again. First, they worked on the next German western "Duel at Sundown" / Duell vor Sonnenuntergang based on the work of the Polish rebel Marek Hlasko with members of Karl May's headquarters: Mario Girotti, Walter Barnes, Demeter Bitenz and Slobodan Dimitrievich.

Then Stozice was completely "occupied" by "Rialto-Film" for two months, as a result of which two regular "Mayevki" appeared, about one of which we are talking about. This was the end of the "golden" era of Slovenian cowboy decorations. Yes, in fact, the time of German westerns, which surrendered under the pressure of "spaghetti", which in the overwhelming majority continued to shoot in Spain, had ended as well. According to some reports, not a single film was filmed in Stozhytsa after “Old Surehand”. The town remained unclaimed for several more years. By the end of the 1960s, it was slowly dismantled. Today, the former territory of the Triglav Film studio, on which the "western" town was located, is owned by the Stozhitsky hippodrome, which has been located here since 1957. There is a riding school nearby.