'Calamity': the legend of the west goes to the 'western' for children (and feminist) 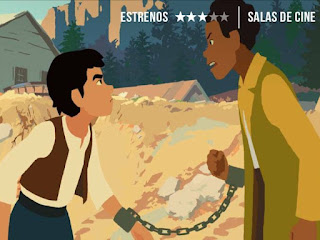 Much of the legend built around Martha Jane Cannary, better known as Calamity Jane, has to do with the lack of reliable information about her biography. Their presence in pop culture is based on rumors and inventions, and on either idealized portraits - such as the one featured in the musical 'Doris Day in the West' (1953), starring you know who - or purely ornamental, like his appearances in the 'Lucky Lucke' cartoons. Now, the mythology surrounding the character is enlarged thanks to the new film by French animator Rémi Chayé, who takes inspiration from both John Ford and Mark Twain to envision him in his childhood years and, in the process, functions at the same time as 'Western' for children and as a portrait of a genuinely feminist emancipatory impulse . Chayé, let us remember, became known internationally thanks to 'The roof of the world' (2015), another story of female empowerment in an eminently male world that transformed an heiress of the tsarist aristocracy into an explorer of the North Pole.

Moving from the frozen expanses to the vast plains and towering mountains of the Far West, Chayé follows in the footsteps of a little heroine destined to become an icon who, if anything, here is just beginning to move into adulthood and understand what it means to have the sex assigned to you at birth. In other words, 'Calamity' observes both the birth of a myth and a process of rebellion against a time when all that is expected of women is to cook, wash clothes and have children.

The story starts in 1863, in the middle of the gold rush. Martha Jane travels with her family in a convoy heading west. When her father breaks his leg, the girl takes on the responsibility of taking care of her wagon and her two brothers - her mother has just died - and little by little she behaves more and more like a 'cowboy' and gains power and prestige in the group. One day, however, she is mistakenly accused of a robbery, and is forced to flee to find the real culprit. The journey, of course, will confront her with a number of dangers.

During that first act, in which the little girl discovers the masculine privileges that are denied to her by her gender - handling the lasso, riding a horse, wearing pants, using firearms - 'Calamity' works almost exclusively as a collection of clichés. —It even includes a scene in which the protagonist cuts her hair in a fit of anger—; as soon as the fugue takes off the plot, however, the film begins to appear much more vigorous. Expertly handling the imagery of the 'western' and complementing it with a representation of nature in which the influence of Hayao Miyazaki is guessed, Chayé takes the girl into an adventure in which feminism does not function as a moral or a flag to wave; Jane's liberation process is especially compelling because she is motivated by her joie de vivre and the promise of an existence commensurate with her rebellious, daring, and reckless nature. Chayé, therefore, uses the character to claim an individuality that is not determined by gender issues and thus introduce the child audience to the debate on sexual identity.

'Calamity' is not exactly a subtle movie, nor does it bother to dodge tried-and-true dramatic formulas. Chayé, of course, makes up for those shortcomings by giving the narration an agile rhythm and filling it with plot twists, and meanwhile enhancing the expressiveness of the animation, which features 'Fauvism' and Gauguin among his confessed inspirations. From its very first sequence, 'Calamity' captures plateaus, valleys and canyons in all their monumentality, through drawings based on large areas of flat colors without a trace, firm lines sparingly dispensed, and stark contrasts between light and shadow. The main asset of these imposing landscapes, in any case, does not lie in their aesthetic value, but in their ability to reflect the moods of the young woman who crosses them.

Story: In 1863 a convoy in the American West, Martha Jane needs to learn how to take care of horses to drive the family wagon. Except she ends up wearing pants and cutting her hair. The scandal that its stark character provokes will force to face all the dangers in a gigantic and wild world where everything is possible.