No, no, there were two directors. There was John Hough, who was a British director who has made films of some importance in the United States, and another Italian named Andrea Bianchi. For co-production reasons, Italy required an Italian director, so the production organized a meeting between John Hough and Andrea Bianchi. The two were there, but it was John Hough who was directing, of course, but Andrea Bianchi from time to time gave his opinion or said something to the other director. 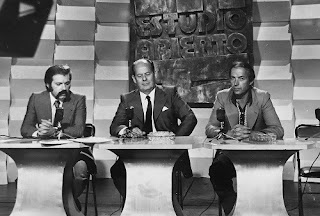 Ángel, on the right, speaking in the popular Spanish television program "Open Study"

Among the international stars he met in these films, the one he possibly worked with the most was Lee Van Cleef. What was your relationship with him like?

I made three or four films with Lee Van Cleef and my relationship with him was very good. We became very good friends. He was about two inches taller than me; He was a very tall and very good guy. He didn't talk much to the people in the movie, he was always with his wife and the double he had, who was like his assistant.

However, the actor with whom I became the closest friend was Robert Taylor. I did with him in Wild Pampas / Savage Pampas (1965), which Hugo Fregonese directed and it was a good movie. Then I was hired to make a film in Egypt, The Crystal Sphinx / La sfinge d'oro(1967), with an Italian director named Luigi Scattini, and there were Robert Taylor, Anita Ekberg and me. We were in Egypt for eleven weeks, and as it was the story of some archaeologists, we shot in the museum in Cairo, in Luxor, in Suez, in Alexandria, along the Nile, in Ismailia. We had a lot of trips because we were filming in different places. For example, we were in Luxor for about four weeks and in Cairo about four. And this man, Robert Taylor, called me brother. I had gone to Rome about a week before him. In Rome they tried on my clothes and, since we were going to Egypt to areas a bit deserted, they gave me vaccinations. And when he arrived, I had already been shooting scenes with Anita Ekberg for three days. Then when he saw me, he told me what he had told me in wild Pampaduring the last weeks: "But my brother is here!" They had already told him who we worked on the plane and, apparently, when they told him my name, he gave a cry of joy, because we got along very well.

Then I also became very friendly with Yul Brynner, with whom I shot two Western films. And he was a great guy. One day he invited me to his caravan to eat with him and his wife a dish that he had cooked, I think it was Tatar steak or something like that. I was the only team member that he invited, so people were surprised and envious that Yul Brynner said that I was his friend Angel.

Apart from the aforementioned Savage Pampas, with the Argentine Hugo Fregonese he also worked on Los monos del terror / Dracula jagt Frankenstein / Operazione terrore (1969), a film that was nevertheless finished by Tulio Demicheli. What happened?

Nothing happened. Hugo Fregonese had to go to the United States to be present in the preparations for another film that he was going to direct. Both Fregonese and Tulio Demicheli were Argentines, and Argentines are very close to the band; they defend themselves a lot. But nothing happened.

[Angel del Pozo characterized as Yevtushenko, his character in "Panic on the Trans-Siberian"]

Horror monsters marked his debut in a genre, fantasy, in which he would also be very active. Within his filmography in this current, his most popular title is undoubtedly Panic in the Trans-Siberian / Horror Express (1972) by Eugenio Martín, considered today a cult film throughout the world, and where he shared a cast with nothing Less than Christopher Lee, Peter Cushing and Telly Savallas. What memories do you have of this movie? Did you feel like you were working on something important?

Yes, I realized that I was working on something important because Eugenio was important. With Christopher Lee, who spoke Spanish better than us, he had already made a lot of friendship in a movie we had met before. And he was a very cultured person and we talked a lot about art and painting, which I have always liked. As an anecdote, I will tell you that, while shooting a film in Rome with Giorgio Ferroni starring Giuiliano Gemma [1] , we met in the studio bar, although he did not drink because he was very careful, and he asked me to translate one into Spanish. phrase he had to say in the movie he was making. I translated it for him and he thanked me.

Another horror film in which he intervenes, already in the mid-seventies, is La demoniada (1975), an indigenous exploit of El exorcista (The Exorcist, 1973) directed by Amando de Ossorio in a very few days. How was this director working? I say this because there are other colleagues who worked with him who complain that he did not care about the actors and that the only thing that mattered to him was "their monsters" ...

I think he was a pretty normal director and with me great. As for the shooting time, it was about six weeks, which was the normal time for a film of this type at that time. Then there were extraordinary things, like The Amazons, which we spent about twelve weeks, or the case that I have already mentioned about The Crystal Sphinx, which took fourteen weeks in total, which is outrageous. But, come on, six to eight weeks was what a movie shoot would normally take.

Within his career, I am struck by his participation in a couple of war films made in co-production with Greece. What can you tell me about them?

In Greece I made That Damn Day / Sti mahi tis Kritis(1970) with Vasilis Georgiadis, who is a director who had won a Golden Globe for a film and had been chosen by the Oscars for best foreign film on another occasion. He was a lovely man. He had seen me in a movie and, since Fernando Sancho was in this one, he asked him if he knew me. He replied that yes, I was well known and we were very close friends. He had thought of me to play the role of General Freiber, who in World War II had been the head of the British troops in Greece. So, I went, made the movie and had a blast, because when I was little, I wanted to be a military man and be dressed as a general in a jeep, reviewing twenty tanks, go figure. I thought it was real, come on. And the role in this movie also served me for many things, Because the production company took me to a hotel in the Hilton chain, and the first day after trying on my clothes, cutting my hair and the director explaining the role to me, I went out for a walk and after half an hour I arrived at the Archaeological Museum, which is what I was looking for, and I found that there was a hotel opposite. I entered the museum, which moved me a lot, the same as when I saw the Parthenon for the first time, which impressed me a lot. After leaving the museum I crossed to the hotel, which was called Acropol, I saw that it looked good and I asked if they had a free room. They said yes, I booked a room and went back to the Hilton to tell them that the next day I was changing to the Acropol because it had the Archaeological Museum opposite. So, after coming back from shooting, the production car would drop me off at the hotel and I would go across to the Archaeological Museum and spend a couple of hours touring rooms that I had already seen. I must have visited it like a dozen times. 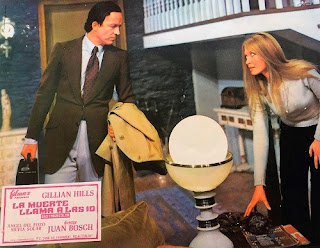 During the middle of the seventies, he began to gradually abandon acting to get behind the cameras and make the leap to directing. What was the reason for this change? Was it the result of a natural evolution?

I got tired of being an actor. Deep down, I didn't really like being an actor. I was wrong, because as Enrique Diosdado was having a lot of success in the theater, he suggested that I go as a gallant with him for a year, but when I talked to Lilí Murati, which was when I was working with her, he set me up with a tremendous candle and I rejected the offer of Enrique Diosdado. And if I had stayed in the theater, I think I would have been a good successful stage actor. But in the cinema, it is simpler, and since they offered me movie after movie ... I have done eighty and I will have rejected twenty, because I couldn't or because I didn't feel like it.

And what prompted you to become a director?

As I told you, I was tired of being an actor and it happened that I began to collect information about the first heart transplant, which was done by Dr. Barnard. So, I thought about making a movie on the subject of heart transplantation. I wrote the script and did … And the neighbor? (1974). I was good at it, the film won many awards and Antonio Ferrandis, who was one of the protagonists, became a European star. He won the best actor award at the Karlovy Vary Film Festival, had a sensational success and from there went on to make very important films.

One of them was Leonor (1975). They called me from Paramount because Juan Luis Buñuel, Luis Buñuel's son, wanted to see the movie. I went to the screening and, when he saw Antonio Ferrandis, Juan Luis Buñuel was amazed, because he wanted to see the film to see Antonio Ferrandis, since they were offering López Vázquez and he didn't like it. By the way, I was also in the movie. Juan Luis Buñuel told me that he wanted to see me in it and, although I explained that I was no longer an actor, he gave me the rod and I played the role of a priest who gets stoned. But hey, that helped me to spend three or four days in Cáceres, which is a beautiful city. There I accompanied Michel Piccoli, who was the protagonist of Leonor, to buy ham, because someone had told him that I understood a lot about hams because I had been a shopkeeper. So, we went to the store and I chose one for him and one for Liv Ullmann, who was the female lead and also wanted one. And a month or so I received a card from Michel Piccoli thanking me for choosing the ham on behalf of him, his wife and his children, because it was delicious (laughs).

As a director he made five feature films and several chapters for series and television spaces. However, in the mid-eighties he left the profession. Why? Did you also get tired of being a director?

I started having charges. I am one of the founders of Telecinco, which was originally called Videotime Spain. By that time, I liked the work of producing and organizing more, and I quit. Nor did anyone come up to say, "Do you want to direct this?"