CINEMATOGRAPHIC SETS: AN EPHEMERAL ELEMENT OR A PROPERTY OF CULTURAL INTEREST? THE CASE OF WESTERN [Part 3 of 3]

Focusing on the western, there are two examples that could fit this definition. One would be the city of Flagstone in Granada and the other the fortress built for the film El Cóndor (John Guillermin, 1970), in Tabernas (Almería).

In the first case, we have a set that was built for the production Until the Time Has Come (Sergio Leone, 1968), with the intention of representing the emerging city of Flagstone, where Jill (Claudia Cardinale) arrives, to later go to his family's farm. Many buildings of this decoration were made of brick, several parts of them are currently preserved. Some walls would be reused in later years for the construction of modern buildings. But others remain standing, in the middle of the plain.

The other case is from the El Cóndor fortress, located not far from the one known as Rancho Leone. It is a gigantic building of several hundred square meters, formed by a towered wall and several buildings, which would be used in several more films such as One reason to live and another to die (Tonino Valerii, 1970), March or die (Dick Richards, 1977) or Conan, the barbarian (John Milius, 1982). Unfortunately, this spectacular setting has deteriorated over the years and fewer and fewer remains are left standing. 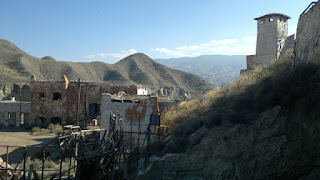 Remains of the El Condor fortress in Almeria

Historic Site is the place or natural setting linked to events or memories of the past, popular traditions, cultural or nature creations and works of man, which have historical, ethnological, paleontological or anthropological value.

The remains of an old set could also be included in this category, as they are places that have been used as the setting for the filming of one or more films. Obviously, a film is a cultural creation, which, depending on the significance or impact it has achieved, may have a historical or cultural value. And I believe that this value can be extended to all the elements that are part of it, including the decorations.

In this category we could include the famous Sad Hill cemetery, in Carazo (Burgos). Recently restored, it is a beautiful natural setting, where the grandiose cemetery was built for the filming of the emblematic final duel of the film The Good, the Ugly and the Bad (Sergio Leone, 1966). The place has great tourist potential, but its maintenance requires an investment in time and money. That is why the Sad Hill Cultural Association has recently requested its declaration as an Asset of Cultural Interest. 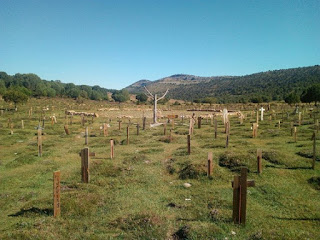 Archaeological Zone is the place or natural setting where there are movable or immovable property that can be studied with archaeological methodology, whether or not they have been extracted and whether they are found on the surface, in the subsoil or under Spanish territorial waters.

This point is a bit more complicated, but I include it because I consider that an old film set, abandoned for years, is also susceptible to being studied with archaeological methodology. It could be argued that the decorations are too recent constructions to be studied archaeologically. But in reality, this is not an obstacle, since archeology is a science that studies sites of any age, as happens, for example, with industrial archeology.

An example of this case could be the western town of Golden City, in Hoyo de Manzanares. It was a set consisting of a dozen buildings and some minor structures, built in 1962 for the filming of spaghetti-westerns. In fact, more than 70 films of this genre were filmed here, including the emblematic For a Handful of Dollars (Sergio Leone, 1964). The set consisted of a dozen complete buildings that were completed with others that were simply facades. It was discontinued in 1973 and remained in place until the mid-1980s.

Until a few years ago the foundations of several buildings were still visible, as well as a couple of watering holes. Unfortunately, except for the troughs, all of it was recently cleaned, leaving hardly any remains. However, despite this destruction, the traces of some buildings can still be seen on the ground, which I am sure, as occurs in some archaeological sites, if they are excavated, they could still be recovered, put in value and adapted for your visit. But not everything is negative in this case. Fortunately, the Hoyo de Manzanares town hall and the Hoyocine Association are trying to recover this place for tourism, for which they have placed a series of information panels that tells what existed there. But nevertheless, the recovery of this place has been hampered by being within the current Regional Park of the Cuenca Alta del Manzanares. This situation raises a new question: can it be possible to recover, excavate and restore a Property of Patrimonial Interest that is located within a Regional or National Park? 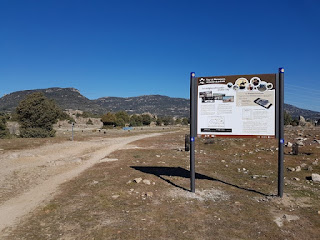 I mention Asset of Patrimonial Interest because it is a category added in Law 3/2013, of June 18, on historical heritage of the Community of Madrid , which is added to those established in the Spanish Historical Heritage law, and in the which could perfectly fit an old movie set or set. According to article 2, point 3, of law 3/2013,

Assets of Patrimonial Interest shall be those assets that, forming part of the historical heritage of the Community of Madrid, without having exceptional value, have a special historical or artistic significance and are declared in this sense.

In other words, it is a new category, considered to be of somewhat less interest, but equally capable of being protected.

On the other hand, according to article 5, point 1, of said law

The Community of Madrid has exclusive jurisdiction over the historical heritage located in its territory, without prejudice to the powers that the legal system attributes to the State and Local Entities.

This implies that, since the town of Golden City is in a Regional Park managed by the Community of Madrid, in principle, there should be no problems for its conservation.

As we can see, despite the attempts to include cinematographic sets in some section of the law, it is very difficult to fit them into the current legislation on historical heritage. There is no section that makes specific reference to them as cinematographic heritage (we have already seen that other elements such as cinematographic films are referred to in title VII, second section, of the Spanish Historical Heritage law, referring to documentary and bibliographic heritage ). Therefore, and in my view, the only solution would be to open a new door and create a specific category for the protection of this part of our culture. As we have shown, there are some interesting precedents, such as, for example, the one we have seen in Madrid legislation, where a new category has been added,

Other examples of this type of initiative can be found in other Heritage laws, such as Law 14/2007 of November 26, on the Historical Heritage of Andalusia , which adds, in its article 26, to the already known categories, another New called Place of Industrial Interest, with which it is intended to protect the places and buildings that have a relevant industrial value. We also have examples in the laws of the Community of Castilla y León and Asturias, in which the category of Historic Road is incorporated or in the Heritage Law of the Valencian Community, in which the category of Cultural Park is created. Thus, and following these measures, could not be added, in some of these laws, a category called Place of Cinematic Interest?

It is surely something utopian to try to protect film sets legally, as part of cultural heritage. And more, taking into account the difficulties of administrations to conserve their heritage, which means that there are still many other monuments of greater historical value that are still in danger of destruction. In addition, the protection and preservation of heritage requires an investment and there is rarely a budget for these things.

But if we analyze the situation well, there is a way to recoup that investment and it is through the enhancement of the property, above all, with a view to its tourist exploitation.   As with other tourist resources (natural places, monuments, etc.), old film sets can be a focus of attraction for film fans, which could have a favorable impact on the economy of the municipality or city where they are located.  At present it is evident that film tourism is becoming increasingly fashionable in our country. Every year, more fans want to visit the places where their favorite movies were filmed. Of course, this interest increases exponentially, if any part or element of the set remains standing, which was part of the shooting and which makes it easier for tourists to recognize the place.

In this way, in case the cinematographic sets could not be legally protected, another option would arise, which is to preserve these sites, reusing them, once their stage of the cinematographic set is finished, for their tourist exploitation or even for the Filming of films, as occurs with the western towns of Almería or Gran Canaria. This is a very interesting option, which, however, has the problem that, to carry it out, a strong economic investment is required, which makes it the less common option.

In short and as a summary of this article, it must be said that, although there are few sets that have remained standing after their abandonment, they have an obvious cultural and tourist interest, which is being increasingly valued by a society in which the cinema plays a prominent role.  This interest makes them worthy of being preserved and valued, as an important part of our historical heritage.

But, as we have seen, the protection of these places by the administrations is still complicated, since it does not have a precise fit within the current legislation. Fortunately, little by little new initiatives are emerging such as the one mentioned for the recovery of the Sad Hill cemetery, which even seeks its declaration as an Asset of Cultural Interest, something that, if achieved, would set a very important precedent, in the face of the conservation of our cinematographic heritage.