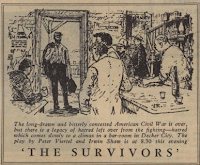 The action of this ‘neo-Western’ takes place in the bar-room of the Court Hotel of Decker City, Missouri, a few months after the end of the American Civil War, and it concerns the resolution of a local feud between two farmers in this war-weary community.

Orson Welles is adding impetus to his production program for the balance of 1966 after his award at Cannes and a colo-producing world release agreement with Harry Salzman for “Chimes at Midnight.

With almost 30 minutes of footage still missing from his modern version of “Don Quixote,” Welles resumed activity on the film by sending a second unit to crowd and bullrun scenes at the Pamplona Fair. Having broken a two-year hiatus on “Quixote.” He will bring his three principals to Spain later in the year for the roles of Quixote, Sancho Panza and Dulcinea to complete the Cervantes classic.

Meanwhile, he is busily prepping his first western “The Survivors,” with script by Irving Shaw. He has Deborah Kerr signed for the femme lead and hope to film the Texas-localed post Civil War Story in the Sierra vicinity of Madrid, this summer. The he goes back to “Qixote” for final scenes.