The series is set in the 1870s, when Kid Lucky has only one thing on his mind: growing up to become the greatest cowboy in the Wild West.

Each new adventure will bring Kid Lucky closer and closer to his dream of becoming a real cowboy. Together with his friends Lisette, Dopey, Joannie Molson, Little Cactus, Kid will try to tame wild horses (sometimes successfully), follow in the footsteps of grizzlies, sleep outdoors and challenge Billy Bad with his slingshot. Kid has an extraordinary aim. In addition, as his name suggests, he is an extremely lucky boy.

But life is not all fun and games, not even in the Wild West. In fact, Kid Lucky and his friends must always ask permission from their parents and meet their expectations, as all boys do.

Between housework, brushing teeth and school, it’s not easy to be a real cowboy! 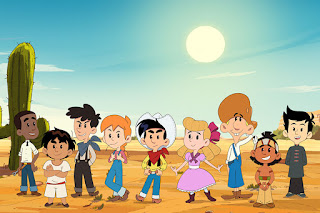