Sergio Corbucci: The Story of the swing and fatigue genre 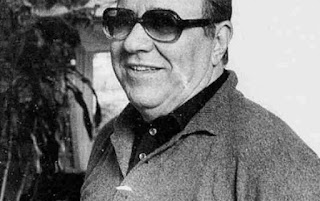 Was he, after multiple culmination of Il Grande Silenzio, general loomed the possibility of further progress for Corbuccija?

, Even more than is the case with the very Leone, Sergio developmental line Corbuccija most indicative internal dynamic reflects the development line Spaghetti Western, its rise and fall, the logic that stands in the heart of a specific expression.

Massacro al Grande Canyon (Massacre at the Grand Canyon, 1964) is not much more than a beginner work, but the Minnesota Clay (1965) already suggested that the director is ready for suspstancijalnije research: now the visible and ambition, the desire to the genre of personal use.

Although Minnesota Clay is not fully rounded, western, it is still extremely important for Corbuccijev work, because it marked the poetic preoccupations which will directed, by the end of the sixties, lead to a level comparable with Leoneovim mastery.

Also, banal, subsequently inserted from the dismal end hepi while unraveling hero (Cameron Mitchell) progressively blind, refers to an inherent line pessimistic in the author's manuscript, which reached its peak in the course monumental Il grande silenzio. (And this film is, at least in one version, add cumbersome optimistic end.)

Johnny Oro (1966) was the frame of newfound entuzijastičnosti, or is Django (1966) superior promote Corbuccija no longer a follower, but as the undoubted leader inexorable wave, authors ready to, in the changed context, effectively distilled and upgrade an applied fiction about the mysterious stranger who comes to the city and the institutions own kind of justice.

Already at the peak, while in the devastated, dirty landscape, Franco Nero behind drags a coffin (never so obviously not in western staged death as a profound, unbreakable metonymy hero), is reflected in the necessary iconographic power of the director's procede to develop a hero who will be an exciting counterpart - and not a mere copy - Leoneovom man without a name.

Django, though the psychological trauma illuminated with the murdered woman, however, is deliberately left to operate on fascinirajućoj, 'rough' area, and the general cynicism that broadcasts movie has a distinction that can not be linked (only) for exploitative approach.

Considering that in Django aesthetic vectors so precisely determined that iconic focusing on heroes crucial modeled not only visual impressiveness of the film, but the director's world view philosophy, Corbuccijev mise-en-scène is as brutal as much subtle, and vice versa: the final frame - bloody gun cemetery, crosses, figures that disappear in in depth - strikingly summarizes the author's poetic setting. 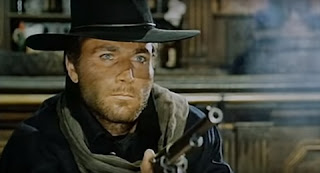 Django represents baroque blooming of spaghetti westerns, as in the treatment of violence, as well as in the visual refinement: this is the moment when I was a director becomes a reference for the other, his hero matrix for the other, therefore, the moment an author writing in film history, marking the binding point of the genre continuity.

Unlike Navajo Joe (1966) in which the revenge of the title hero still leaves, however problematic, ethically space, I crudeli (Cruel, 1967) Corbucci observes the dissolution of all moral codes, especially with Colonel Jonas (Joseph Cotten), who and still hypocritical attempts to maintain the apparent order and quasi-military honor.

Director's pessimistic view, that scoring marks the fundamental impossibility of idealized images of the Wild West, almost objectively captures how things are going toward its fatal and fatalistic end in which fate is published in the form of ironic conclusion and the conclusion.

This uncompromising vision is concretized - lessons from Django is extended, with similar existentialist overtones - in the metaphorical use of suitcases, which initially hides the stolen money (stock colonel's desire for the continuation of the civil war), to eventually revealed to contain only - anonymous, unimportant corpse .

Corbuccijeva black-humor executions: dramatic irony, among other things, is a situation where the wrong object in the right place.

In contrast to almost the ekskrementnom mud that covers the city in Django, in Corbuccijevom absolute masterpiece and one of the most westerns, not only in the sixties, Il grande silenzio (Great Silence, 1968), is set in 'virgin' atmosphere of snow white landscapes is present only to be more painful and drastic imprinted indelible traces share generic process of bringing the law more 'uncivilized' space. (General impression is underlined ingenious Morricone music that melancholy, lyric counterpoint violently content.)

Previous director's ethical 'indolence' in this film turned into an unusually penetrative analysis of the shattering conclusion. All the fragility of the legal system in Il grande silenzio is detected narrative plot in which just the bounty hunters still carry out the law: the greatest barbarism is the legitimization of barbarism, the introduction of the crime in the permitted legal frameworks.

Despite all melodramatic basis that emotionally strongly divided brutality Tigrera (Klaus Kinski), ruthless hunter, and a silent avenger (Jean-Louis Trintignant) who earns almost compensating for the debt of the past, Corbucci insists on disturbing parallels to the similarities of the heroes. So again, the dreaded end of the film - that seemed to anticipate depressive comprehensiveness of Heaven's Gate - where it will be a massacre in cold blood commit 'the Act', remains one of those neizdržljivih but necessary moments when the genre examines its borders coming down in the gloomy anthropological depth, where there is no redemptive release.

Il grande silenzio - which is ambient found inspiration in the great Day of the Outlaw (Dan outlaws, 1959) André De Toth - film in which sublimate crucial features spaghetti westerns, but also the realization that exceeds operationalized generic frames: exploitation ended in melancholy , the cynicism that goes into meditation, despair and rage that end up in tragedy.

Was he, after multiple culmination of Il Grande Silenzio, general loomed the possibility of further progress for Corbuccija? The postmodern logic dictates that, as they had at the beginning recycled American role models, now start the process of autocitatnosti, repetition of existing hits, own gesture.

Gli specialists (Specialists, 1969), regardless of the strange, almost surreal sequence with bare citizens on the street, was a step back, at least for anti-hippie attitude, but Il mercenario (hireling, 1968) and Vamos a matar, compañeros ( Let's kill him, comrades, 1970), offered a big-budget, stylish, violent definition Corbuccijevog type westerns.

At the end of the regression, as much as expected, still unjustifiably took the parody, which outlined and final, phase degrading the whole sub-genre. La banda J. & S. - Cronaca criminale del Far West (J. & S. gang - criminal chronicle the Wild West, 1972) is the only predictable 'humorous' adventure, and Che c'entriamo noi con la rivoluzione (What are we doing in the midst of a revolution , 1972) and bianco, il giallo, il nero (white, yellow, black, 1975) are films in which a stretch in a generic environment introducing possession and gag are, unfortunately, involved the final director's genre 'transition': the end Corbucci career is instead universal spaghetti western, filming local Italian comedy.