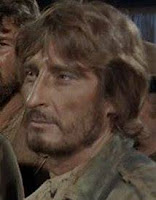 Assistant director, stuntman, master of arms and actor Gilberto Galimberti has died in Rome, Italy on June 16th. He was 84.  Born in Rome on February 25, 1933, Gilberto was an expert in judo and debuted as a film actor in the early 1960s thanks to his acrobatics skills, which lead him to become one of the most important master of arms at that time. In 1976, together with some of his colleagues, he founded The Acrobat Cinematography Organization, which, among other things, dealt with Tomas Milian's films. Among the films in which he appeared the two Trinity films with the Bud Spencer and Terence Hill, are best remembered. After taking part in over 180 films often being billed as Gil Roland, he concluded his career in the early 1990s. He had appeared in 43 Euro-westerns during his career.
Posted by Tom B. at 10:26 AM