Andalusia Spain. Province of Almeria. Tabernas. It is the only desert in Europe and has been the scene of the Spaghetti westerns directed Sergio Leone. 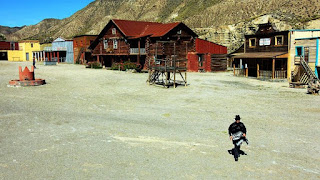 There are no other deserts, in Europe. It's the only one. Tabernas desert is located in Spain, in the province of Almeria. And among these rough canyons, Sergio Leone decided to set many of his unforgettable "Spaghetti westerns", a fascinating Western-style setting that reminds one of the vast expanses of Utah, Nevada, Arizona and New Mexico in the United States.

Tabernas Desert: where is it located.

The desert of Tabernas is located 30 kilometers from the city of Almeria, about 400 meters altitude. It is a vast territory of nearly 2,000 square kilometers and is surrounded by the Sierra de los Filabres and Alhamilla. It has a good number of cinematic shots to its orographic features that make it very similar to dusty and lonely overseas areas. Its moon appearance and its particularly dry climate made it the ideal place for filming these films which were masterpieces born from an Italian-Spanish collaboration in the late 1960s, which became famous as the "Spaghetti western". Their undisputed master was Sergio Leone.

The places of the set

What does not remind you of the saloon with those domino effect screaming sounds? Or the church with so many Sunday sermons and the Indian villages with bonfires, buffalos and tents? But also the dust raised by the passage of caravans and horses shown galloping in the meadows. Abandoned villages where the "good" go hunting for the "bad guys". All scenarios which are still visible today.

Some of them you can pay a fee to visit, such as Jill’s house in "Once Upon a West". Others, on the other hand, are to be found between the earthy desert hills which are accessible by jeep. The reference goes to the demolished bridge of "Duck You Sucker". Or at the Circle of Rocks of the famous duel in "For a Few Dollars More". Memorable scenes that marked an era and forged the childhood of many of us, and where the timeless soundtracks of Ennio Morricone resound.

Clint Eastwood's famous "Good, the Bad and the Bad" cigars spread his smoke right across the valleys of this balmy landscape. And this reddish, wind-blown earth has been the backdrop to a wretched San Miguel. But also in the dingy village of Agua Caliente, today lightly inhabited, silent, white houses and distracted faces....

Tabernas Mini Hollywood, Texas Hollywood, Western Leone. Here are the sets built at this time and which are still in use, the best places to revive the boundless and desolate territory between Mexico and the United States. Wooden villages where the villains are hanged, you step on the pavement and the women wait on the thresholds with their hands against the sun and the wide skirts raised by the wind. You can walk between saloons and ranches, between the bank and the funeral parlors, through the jails, the sheriff's office, and the barber's shop. Everything is perfectly preserved. It is a pity that the great adventure of the legendary far west is now a memory of the past. And it is very unlikely to see again a cinematic crew trotting again over this terrain.
Posted by Tom B. at 6:02 AM