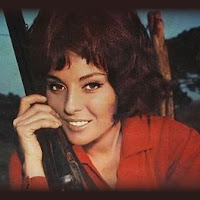 Italian actress José Greci died on June 1st in Rome, Italy. She was 76.Her death was confirmed by her friend actress Martine Brochard on her Facebook page. Giuseppina Greci on January 10, 1941 in Ferrara, Emilia-Romagna, Italy, the daughter of the journalist and television writer Luigi Greci, in 1956 at just fifteen years old Greci enrolled the Silvio D'Amico National Academy of Dramatic Art; after two years she left the Academy to debut on stage. She made her film debut in 1959, playing the Virgin Mary in William Wyler's “Ben-Hur”. From there she started appearing in dozens of genre films, soon becoming one of the most prolific actresses in the 1960s Italian cinema, particularly becoming a star in the sword-and-sandal and euro-spy genres. She was also active on television before she gradually abandoned her career in 1974. Greci appeared in one Euro-western 1968’s “Bury Them Deep” as Consuelo/Pepita and starring Craig Hill.
Posted by Tom B. at 7:03 AM