The longest comic-book run of Frank Frazetta's career! First appearing as a backup feature in Durango Kid in 1949, Dan Brand - known as the "White Indian" - is a colonial-era city boy whose life is marred by tragedy. When the death of his fiancee sends Brand through the wilderness on a trek to kill her murderer, he also begins a journey that will transform him into a hardened pioneer survivalist. The powerful sequential work of Frank Frazetta is in the spotlight in this collection, with all interior pages scanned from original comic-book issues and digitally cleaned. As the first White Indian story declares, "When our country was young... and the truly great Americans were the intrepid pioneers of the backwoods, where the woods were thick and sown with sudden death... the greatest of the backwoodsmen was Dan Brand!" Join us as a wily pioneer and his sidekick Tipi brave the wilds of the American "New World" and a young cartoonist takes an industry by storm with his powerful talents in the 1940s and 1950s. 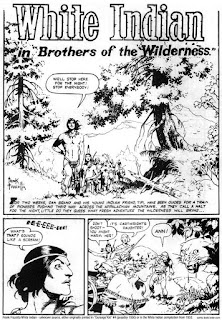 Originally published in 1974 by Napoletan Association it consisted of 5 issues.
A 192 page volume was published of sixteen adventures.

Frank Frazetta (February 9, 1928 - May 10, 2010) is considered by many as the greatest heroic fantasy designer of all time. His work influenced generations of artists, fans, designers and directors. Frazetta has redefined the concept of design legend thanks to the comic strips of the 1950s and the stunning cover of Tarzan, King Kong and John Carter of Mars: Monster Magazines of the '60s, such as Creepy, Eerie and Vampirella; His most important film posters, including After the Fox and Ciao Pussycat (What's New Pussycat); And, of course, to his revolutionary paintings by Conan. This volume collects all the sixteen adventures of White Indian made by the American master.
Posted by Tom B. at 5:53 AM