Between February 1976 and August of the following year, the publisher Sagedition , until then confined to the nice adaptations of American television series, cartoons and American super-heroes (Superman and Batman), published the magazine KARACAL, a quarterly which, Lasted 14 issues.

Its purpose was to publish a complete series of realistic stories of adventure of very high quality, most of them from Argentina, a big country in comic publications, via the editions Record: most of them, appeared in the weeklies Italian Lanciostory and Skorpio from Editions Editorial in Italy, a country close to Argentina, especially since a famous group, the group of Venice set out to conquer this distant land just after the Second World War, with Hugo Pratt in the lead.

One of the best series proposed by the magazine is undoubtedly Richmond man (Black Soldier / Uomi di Richmond ). 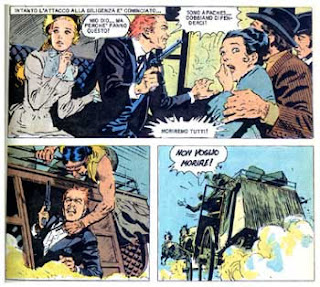 This series recounts the adventures of a gentleman from the South Ron Warlock called "San Francisco", ruined by the war of secession who owes his life only to his cowardice.  His encounter with the pistolero Brett Yancy who teaches him to use a weapon and to overcome his fear will upset the course of his existence.  Henceforth, this elegant aristocrat who had never touched a gun of his life will become one of the greatest pistoleros of the west.  During the first episodes of the series, he saw some solo adventures, in search of redemption, then quickly joined an acolyte: the crafty Gilé (Chaleco in the original version) a Navajo Indian who will quickly become his friend in spite Of their incessant bickering. Soon was added to the duo Lola, the Mexican "with the proud and passionate glance", companion of Gilé then Polly Dugan, a pretty Scottish photographer, with the well-tempered, "love" Warlock.  This unlikely group will now travel west on a wagon train and live adventures that were always very well written because they take a close interest in the human soul and its faults (jealousy, hatred, cowardice, etc.). 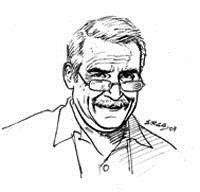 Ernesto Rudesindo García Seijas was born June 1, 1941 is an Argentine comics artist. García Seijas was born in Ramos Mejía, and at age 17 he made his debut in comics by providing art for the series Bill y Boss, published in the Argentine magazine Totem. Also in 1958 he started working for the magazine Bucaneros in the eponymous series, as well as for other publishers as artist and cover illustrator.

In the 1960s and 1970s he worked with Hector G. Oesterheld at the magazines Frontera, Hora Cero, Misterix and Rajo Rojo: titles he worked on include Tom de la Pradera and Leon Loco. García Seijas later collaborated substantially for Columba, a publisher specializing in romantic comics books for women and in film adaptations; these include Helena, created by Robin Wood, which was turned into a TV series in the 1980s.

He also produced comics strips for the newspapers El Clarín (El Negro Blanco, written by Carlos Trillo, 1987), La Nación (Especies en Peligro, written by Viviana Centol, 2000) and La Prensa (Bardo); El Negro Blanco later spawned the erotic-thriller series Flopi. Most of these series were translated in Italy by Eura Editoriale in its magazines Skorpio and Lanciostory. In 1990s García Seijas started to work directly for Eura Editoriale and then for Sergio Bonelli Editore, Italy's largest comics publisher. Among his series for Eura are Radzel, a fantasy comics written by Eduardo Mazzitelli (1999).

García Seijas' first work for Bonelli was Julia #80, written by Giancarlo Berardi. Later he entered the staff of regular artists working for Tex Willer, starting with the story "Polizia Apache" (in the Almanacco del West 2007), followed by his first story for the ongoing series in 2008 (#571, in May). In 2011 Bonelli published his Tex large-format one-shot Le iene di Lamont (2011), with script by Claudio Nizzi.