Who Are Those Composers ~ Alessandro Alessandroni 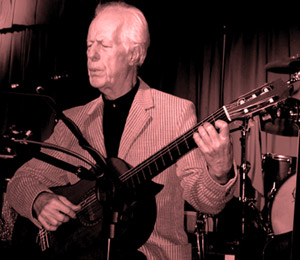 In the village of Soriano, where Alessandro grew up, there were small shops called Barber & Taylor shops and they had a myriad of instruments hanging on the walls. In between clients or when there were no clients at all anyone could play the mandolin or guitar or cello or clarinet and that is how he started this journey. He was self-taught with no professional training. He bought his first mandolin at age 13. He also discovered as a boy that in addition to being proficient on a multitude of stringed and keyboard instruments, he had an uncanny ability to whistle. By his early thirties, he was making a living touring Germany as a singer, pianist, and guitarist, and he later formed a group in Rome called the Four Caravels whose sound was modeled on the work of the Four Freshmen, and served as their arranger as well as leader. The multi-talented Alessandroni was soon to become one of the busier session musicians in Italy, and achieve stardom in totally unexpected musical idiom.

During a recording session of music for an early film Alessandroni was involved with, composer Nino Rota, who asked if anyone in the orchestra could whistle. I was playing guitar then. When no one came forward he said that he could try but couldn’t promise anything. But it worked and that is how the quality of his whistle was discovered.

During the early 1960s, Alessandroni crossed paths professionally with a slightly younger former boyhood friend, Ennio Morricone, who, after a few years as a musician working in jazz clubs, had begun to emerge in the field of movie music. Morricone had just scored his first Western and was working on another, and wanted to add some new sounds to his work. Alessandroni's guitar and his abilities as a whistler came to the fore on the resulting score for “Pistols Don't Argue”, within the framework of a traditional Western ballad. But that success was merely a toe in the water in terms of their collaboration -- Morricone had another project in the pipeline, called “A Fistful of Dollars” (1964), a Western that was anything but traditional, and it was here that Alessandroni began collaborating with him in the making of some much more important music, and utilizing far more of his range as a guitarist as well. With a lonely, echo-drenched whistle over a repetitive guitar figure, with added flutes, whip-cracks, and Alessandroni's Duane Eddy-style electric guitar coming in along with a wordless male chorus -- courtesy of Alessandroni's vocal group, now expanded to a dozen or more members and renamed I Cantori Moderni -- the haunting title track redefined the sound of Western movie music.

Alessandroni would go on to become a film composer in his own right and remained one of the most prominent and influential musicians ever to play on film scores or, through that medium, to influence popular music around the world. Over the decades since his music was popularized in film music, Alessandroni has worked with dozens of star performers, including Americans such as Paul Anka, and most of Italy's top talent. He’s been noted as one of the top 10 guitarists of ll-time in several guitar based magazines.

Alessandro was married to photographer and journalist Margaret Courtney-Clarke. Previously he was married to sin ger Giulia De Mutis until her death in 1984, with whom he had two children: composer Alex Alessandroni and Cinzia Alessandroni.