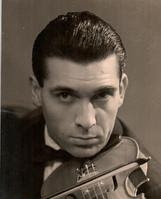 Italian born composer and musician Armando Sciascia died at his home in Trumbull, Connecticut on June 23rd. He was 97. Born in Lanciano, Abruzzo, Italy on June 16, 1920, Armando was a classical violin player he was the head a recording company he founded, the young artists he discovered and made famous during his many crossovers to contemporary popular repertory, just as jazz and rock n' roll, were blossoming during the early '60s. As a graduate of the Rossini Conservatory in Pesaro, Italy, his classical background also permitted some interesting arrangements of classical music in modern dress, for which he apologized to his otherwise 'classical music lovers' but quickly found a new audience to his young followers. Armando scored two Euro-westerns: “Die for a Dollar in Tucson” (1964) [as H. Tical] and “Three Graves for a Winchester” (1966).
Posted by Tom B. at 8:38 PM