Who Are Those Guys? ~ Rod Cameron 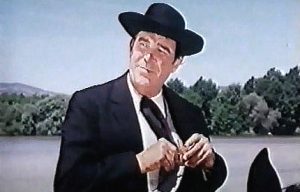 Born Nathan Roderick Cox on December 7, 1910 in Calgary, Alberta, Canada, he worked in construction, before entering the entertainment industry, where his tall and athletic build initially lent himself as a stuntman for Fred MacMurray in the pictures "Rangers of Fortune" (1940) and "The Forest Rangers" (1940). Gradually, acting roles were found, as he amassed scores of credits (particularly in Westerns), in low-budget and mid-range pictures, among them "Renegades of the Rio Grande" (1945), "Stage to Tucson" (1950) and "Wagons West" (1952). Cameron will probably be best remembered for his string of TV roles on the programs "City Detective" (1953 to 1955) as Lieutenant Bart Grant, "State Trooper" (1956 - 1959) as Rod Blake, and "Coronado 9" (1959 - 1961) as Dan Adams. When his Hollywood career began to slowdown in the mid-1960s he went to Europe and appeared in a number of Euro-westerns. He remained active performing in films and guest roles on TV until the late 1970s.

Cameron's private life was colorful; in 1960, he divorced his wife and later married her mother. Hence his former director, William Witney, publicly acclaimed Cameron the bravest man that he had ever seen.

In his later years, Cameron lived on Lake Lanier in northern Georgia. He died after an extended battle with cancer in the nearby city of Gainesville in Hall County on December 21, 1983 at the age of 73. The location of his ashes is unknown. He was posthumously awarded a star on the Hollywood Walk of Fame.