We continue to our search for filming locations for the 1966 film “Navajo Joe”. The five men now separate into two groups with Duncan and Sancho going one way and the other three men going another. The three men discover a cave and there they are killed one at a time by Joe.

The scene was filmed north of Gaudix in the surrounding hills. 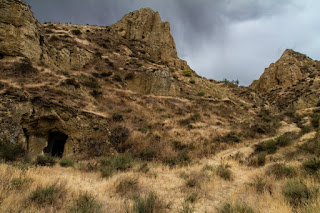